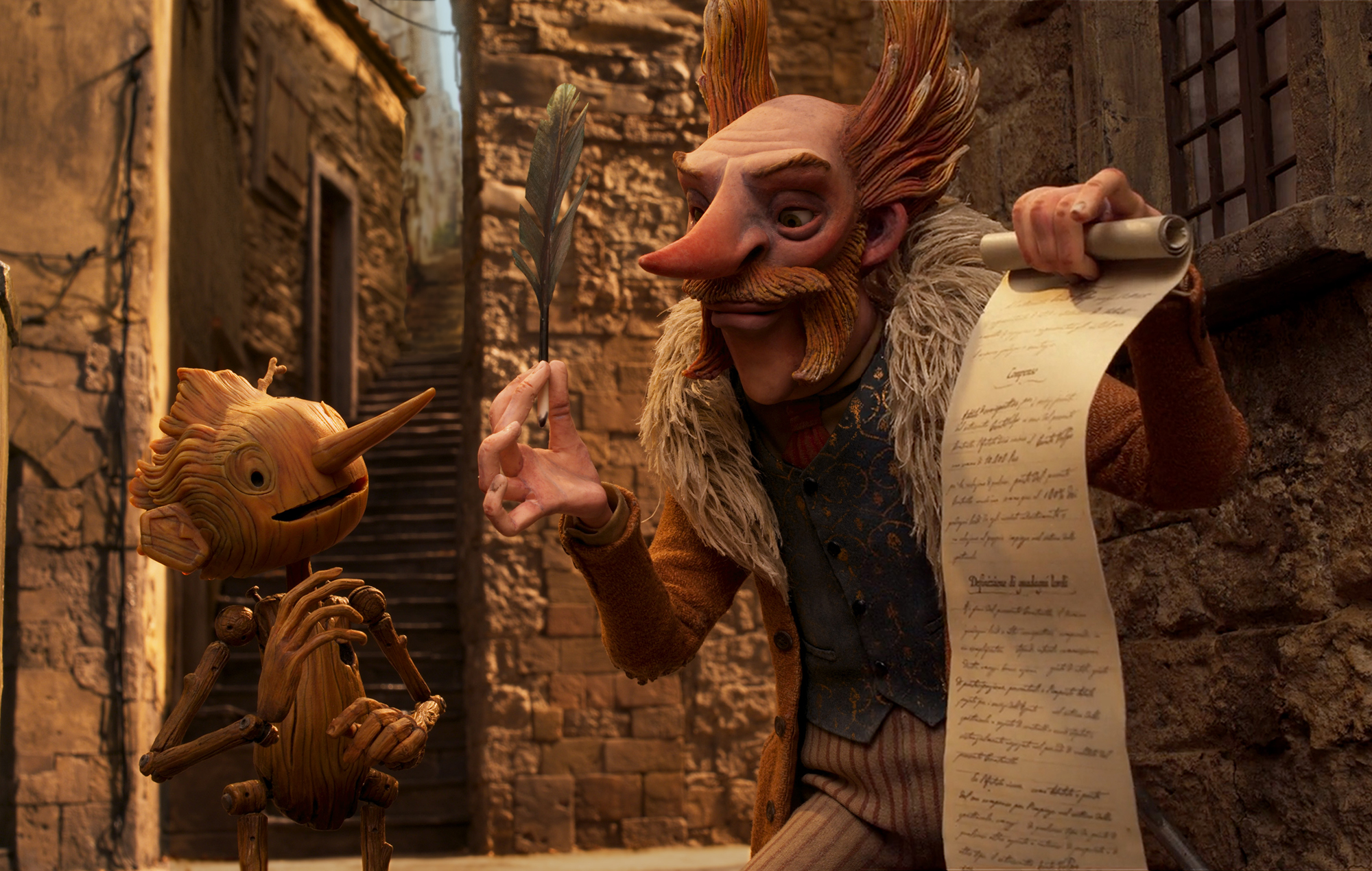 When you wish upon a star, nothing happens. Guillermo del Toro first dreamt of making his own animated version of Pinocchio in 2008, with a dozen stalled attempts keeping the film stuck in production hell for nearly 15 years. Now finally arriving (thanks to Netflix), the film stands as something much more than a passion project – a grand grown-up fairy tale that says less about magic and more about acceptance; about making the most of what we have while it lasts.

If you’re expecting Disney, you might be in for a shock. Here Geppetto (After Life‘s David Bradley) starts off with a real son, Carlo, who gets blown up in the first 10 minutes. Geppetto turns to drink, a load of scary flying eyeballs turn up, and the old man hacks away a log in a drunken rage – making a new son that crawls into being like something out of a Japanese horror. Also Mussolini is in it.

Set in a world very familiar to fans of Del Toro’s Pan’s Labyrinth and The Devil’s Backbone, fascism is the proper monster here as Pinocchio takes his first steps in the middle of Italy during the Second World War. If it feels like a leap, it’s worth going back to read Carlo Collodi’s original folk tale, or even to watching Disney’s 1940 classic, both darker and more dangerous than they’re often given credit for.

Here though, del Toro (along with co-director Mark Gustafson) finds the perfect setting for his take on the story’s classic beats – a wooden puppet springing to life, breaking nearly all the rules, and getting into trouble with everyone he meets. While far right-wingers sweep through Europe, Pinocchio’s mischief making becomes a slap in the face for blind obedience; he’s a rebel hero without even really knowing why.

Not that’s it’s all politics and violence. Just about suitable enough for young kids (who don’t mind a few trips into an underworld policed by terrifying skeleton rabbits…), Pinocchio also knows how to have fun. Led on his merry way by Ewan McGregor’s musical cricket, Gregory Mann’s mad puppet boy is like an eight-year-old let loose in M&M World – bouncing off the walls, singing (slightly annoying) songs and farting at fascists. The set-pieces are all big and bright and exciting, and del Toro knows exactly how to balance the darkness with light – often leaning on Cate Blanchett’s weirdly cast monkey sidekick for the comedy.

The bigger draw though is the animation itself. Partnered with the Jim Henson company and ShadowMachine (the studio who made BoJack Horseman), del Toro and Gustafson make Pinocchio look better than ever before. Rendered in gorgeous stop motion against hand-painted backdrops, there’s something fitting about seeing the story brought to life with actual puppets – genuine movie magic in action.

Looking and feeling every inch like a film made without compromise, Pinocchio was worth the wait. Del Toro has been talking about making the film for most of his career now, and the pay-off shows in every brushstroke and thumbprint. Maybe wishes really do come true, if you keep trying for 15 years…

‘Sheryl’ review: along the winding road with a country-rockin’ queen