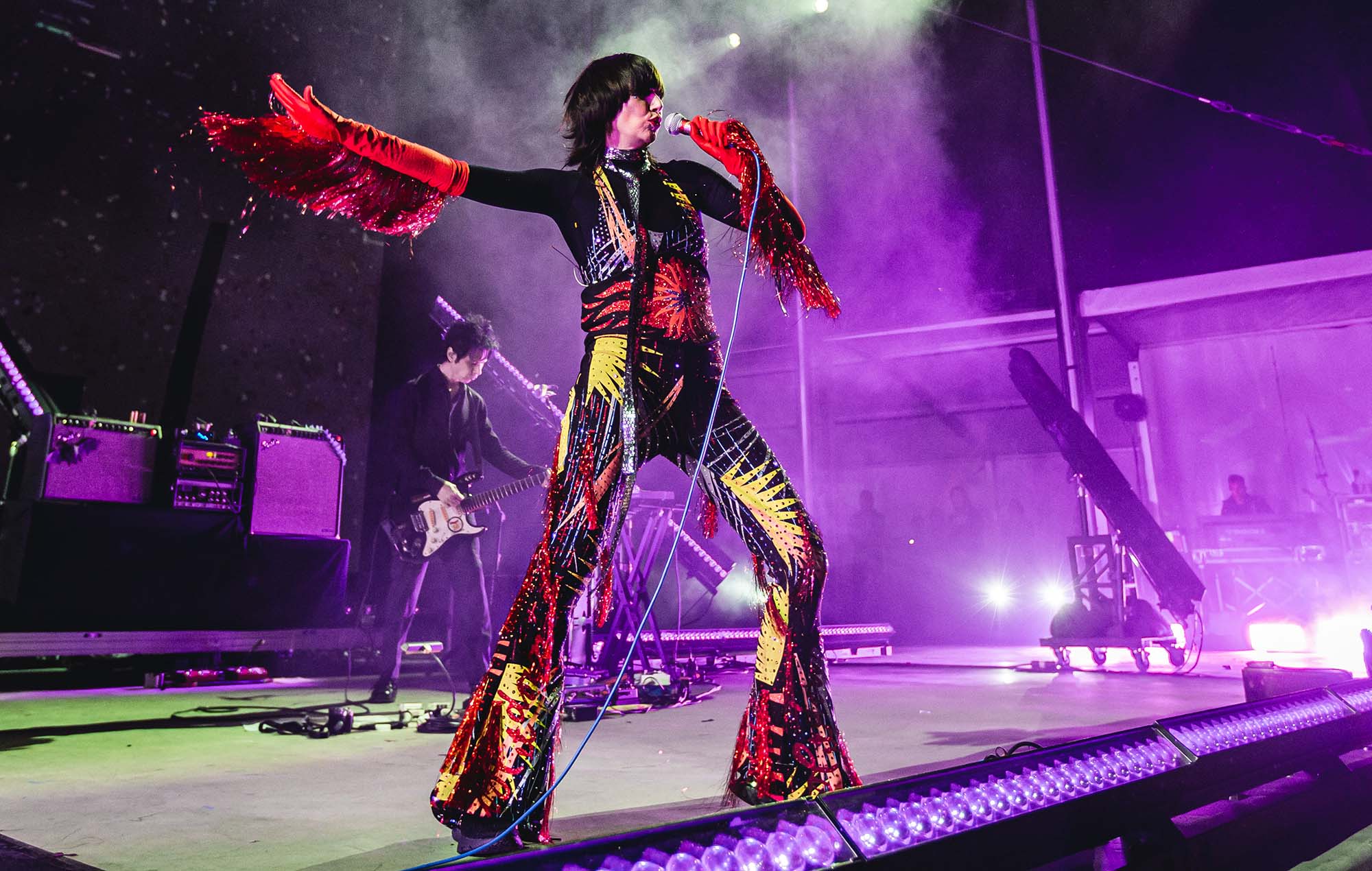 “If the young Karen O, oh man… if I saw this show I’d be fucking stoked!” the Yeah Yeah Yeahs’ formidable frontwoman says as the intro to ‘Maps’ slowly builds in the background. “It means the world to me, it means the world to me tonight,” she adds, as she dedicates the blistering heart breaking ballad to the “deeply soulful, deeply brilliant Asian-American women” the New York City band has chosen as openers for their sold-out ‘Cool It Down’ release party. “It might not feel like it but for me it’s like history in the making,” she says.

The Linda Lindas, a punk rock outfit from Los Angeles, whose median age is 14 years old, kick off O’s dream line-up on a rainy day in Queens, New York. The tennis court – which now doubles as the ‘Cool It Down’ party venue – is coated with water, and Forest Hills Stadium is ornamented with fans in ponchos, something the young rockers say makes the crowd look “cool and shiny”.

Wearing intricate braids and a yellow dress that shimmers in the same tones of the flowers circling her gong, Japanese Breakfast (aka Michelle Zauner) brings more subdued but also expansive energy to the stage next. Launching off into the cinematic ‘Paprika’ with an ear-to-ear grin before sharing the sugary romantic track ‘Be Sweet’, Zauner may not immediately emulate the same raucous and brash energy as her line-up counterparts. However, the emotions lacing her lyricism, and even the exasperated and excited vocal delivery she graces ears with during the refrain of ‘Everybody Wants To Love You’ are a forewarning of the night’s passionate headline set.

When it’s their turn to pick up the baton, guitarist Nick Zinner, drummer Brian Chase, and O receive a deafening cheerful greeting from fans. “This is the biggest New York show we’ve ever played,” O announces emphatically. “And it only took 22 years!”

She continues, with exasperation and teary delight: “I don’t know where to start, but here we go. I can’t express to you how deeply joyful tonight is for the Yeah Yeah Yeahs.”

‘Spitting Off The Edge Of The World,’ their Bowie-influenced album ignitor and first taste of new music from the band in more than a decade, launches off their setlist. The energetic performance of the track brings levity to its sinister subject matter of impending climate collapse, and as the band dedicates the song to the younger generation, there’s an optimism in the air whilst fans dance along to lyrics about the apocalypse.

Though uptempo crowd pleasers ‘Heads Will Roll’ and newcomer ‘Wolf’ go off like a house on fire, with the band proving the passing of time had no impact on their showmanship, some of the quieter moments in the set stand out as the evening’s highlights.

The steady synth track, ‘Blacktop’, is captivating for onlookers, who listen carefully as O whispers the words, “One to one, we sway, and all the pain flows / open, open, opened up.” The spoken word moment in ‘Cool It Down’ plays well live as O recalls “When I was young and easy, in the mercy of his means…” as if she’s narrating the lived moment in real-time.

The night is also brimming with dedications: to youth, “lovers”, and family, as the voracious vocalist calls out the fact that Zinner’s family, Chase’s family, and her family are all in attendance.

As the band revs up ‘Date With The Night’ at the encore’s close, the same electricity that seems to be dripping from Karen O’s crimson, glittery, fringe gloves drenches the crowd. There’s an acknowledgement of what was just witnessed. Not just a release party, but evidence of what listeners who’ve watched the band over the past decades have experienced first-hand.

There’s a ​​rebelliousness, and uncontainable spirit shining from the Yeah Yeah Yeahs, ones that continues to inspire generations of musicians, one that is raw and felt intensely. It’s an energy that could be felt in Forest Hills on Saturday night, from the front row to the nosebleeds. It’s the same delightful and defiant energy that sent the sea of New Yorkers back to their appropriate boroughs buzzing, grateful they got to see the Yeah Yeah Yeahs grace their hometown again.