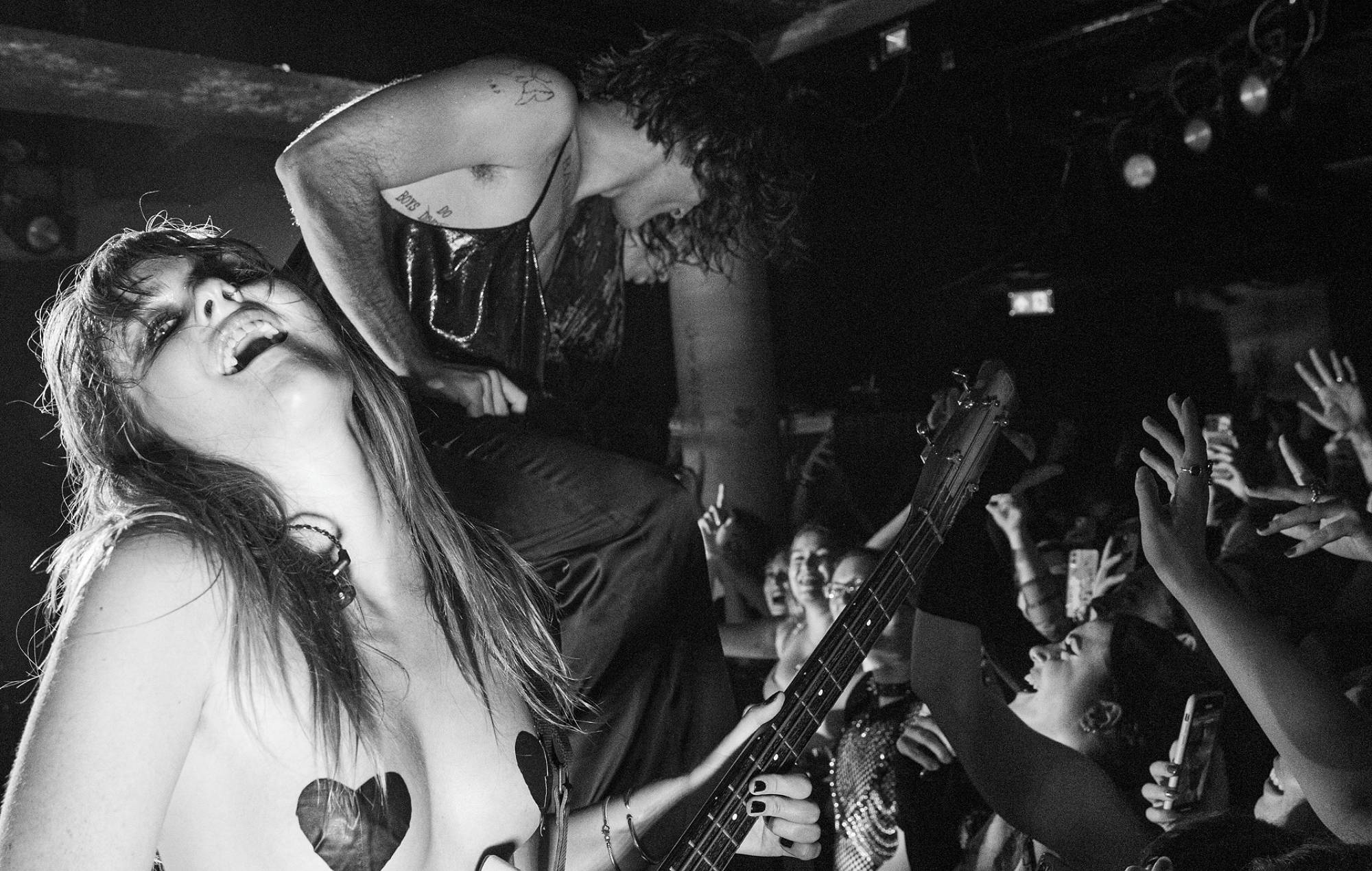 Måneskin debuted their new single ‘The Loneliest’ last night (October 6) at a free show at London’s The Underworld in Camden. Check out footage, the setlist and what went down below.

The Italian glam sensations announced the last-minute show the day before the gig, with fans queuing from the early hours of the morning for a chance to get tickets. Even after the band started, a string of hopeful people still snaked around the building.

Inside the sweaty, 500-capacity venue, lucky fans were chanting the band’s name long before they took to the stage. Victoria De Angelis, Thomas Raggi, Ethan Torchio and Damiano David appeared just before 9pm with David greeting the deafening screams with a simple “hello” before Måneskin launched into their Eurovision-winning anthem ‘Zitte E Buoni’.

The big riffs of ‘In Nom De Padre’ and the energetic punk of ‘MAMMAMIA’ quickly followed, with David amping up the already chaotic crowd by demanding they put their hands up and move “all together”.

| Måneskin on fire at The Underworld Camden w/ ‘MAMMAMIA’ in London, United Kingdom.

“Here we wrote some of our best songs so we thought it would be a good place to present our new single,” David explained of the band’s decision to fly to London for this one-off show before a giddy rendition of their now-iconic cover of The Four Seasons’ ‘Beggin’’.

“OK, we’re now going to play our new single,” David teased before the band launched into current single ‘Supermodel’ with the ‘90s-inspired alt-rock anthem uniting the room in a deafening singalong. “Very good, very nice,” said David who then checked in on the front rows.

An extended version of ‘For Your Love’ followed, with Raggi and De Angelis both indulging in some wailing, psychedelic riffs as David air-guitared along. “That’s fun,” he beamed after the track, before telling the crowd, “we would love to bring you on stage by the way, but we have no room. There’s barely room for us up here.” Måneskin then performed an urgent, furious ‘Lividi Sui Gomiti’.

| Victoria De Angelis performing ‘FOR YOUR LOVE’ tonight at The Underworld Camden in London, United Kingdom.

“It’s fucking hot in here, isn’t it,” David said afterwards, then wished one fan happy birthday. “OK, this is the last song before the new song. You want to skip it,” he asked the crowd. “Who said yes? Get out,” he joked, with the band then launching into a frantic ‘I Wanna Be Your Slave’.

“The moment has come. Usually, we fuck shit up but today we’re going to try our best not to do that,” said David introducing their new, MNEK co-written, emo ballad ‘The Loneliest’. “But if we do, who gives a shit? It’s on Spotify at midnight. Ladies and gentlemen, for the first time – ‘The Loneliest’,” he continued as the band launched into the brooding, slow-burning track.

| ‘THE LONELIEST’ live tonight at The Underworld Camden in London, United Kingdom.

. @thisismaneskin performing "The Loneliest" for the first time at The Underworld. pic.twitter.com/E3D9mtHGYQ

The most ambitious song Måneskin have released since winning Eurovision, the track sees band trading flamboyance for theatrics and emotion as they performed the searing, goth rock track.

“OK guys, that was it,” David said afterwards as the band joined him to take a bow. “We really hope you enjoy it and we’re very grateful for everyone here tonight. It’s a special moment for us, it’s the first English ballad of our careers so it means a lot to us. Thank you so much, we hope you had fun, this is Måneskin.”

As the band left the stage though, chants of “one more song” rang out. The house lights went on, music started playing through the speakers before both were once again cut as Måneskin returned to the stage for an impromptu encore. “I already undressed, so if someone says Måneskin are mean, tell them to fuck off. Nobody does this shit,” said David with a grin as he struggled to put his boots back on. The band then played ‘The Loneliest’ once more, with the crowd already singing along to its soaring chorus.

“OK guys, once again thank you. We love you, we hope you’re going to cry your shit out with this song. We want to make you sad,” David joked during their second curtain call before getting serious. “It means a lot to us, so thanks so much for being here. We love you, thank you London.”

This follows the band playing a surprise and intimate London show last October, receiving a five-star review from NME – concluding: “Naysayers will try to brush them off as a novelty act, but Måneskin are no joke.

“They’re not a pastiche of former rock’n’roll glories, they’re living it. They’ve far more in common with Iggy & The Stooges than they do with The Darkness, and appear more the sort to worship at the altar of Placebo and read from the Velvet Goldmine playbook than riffing of Steel Panther’s tired japes. It’s douze points from us. Wham, bam, thank you Måneskin.”

Måneskin return to London in April, for a headline show at The O2 as part of their Loud Kids World Tour – find tickets here.

A run of North American dates are also scheduled between late October and mid-December, 2022, with tickets available here.

The post Måneskin debut ‘The Loneliest’ and deliver fan favourites at sweaty and intimate London show appeared first on NME.

‘Call Of Duty: Advanced Warfare’ sequel reportedly in the works