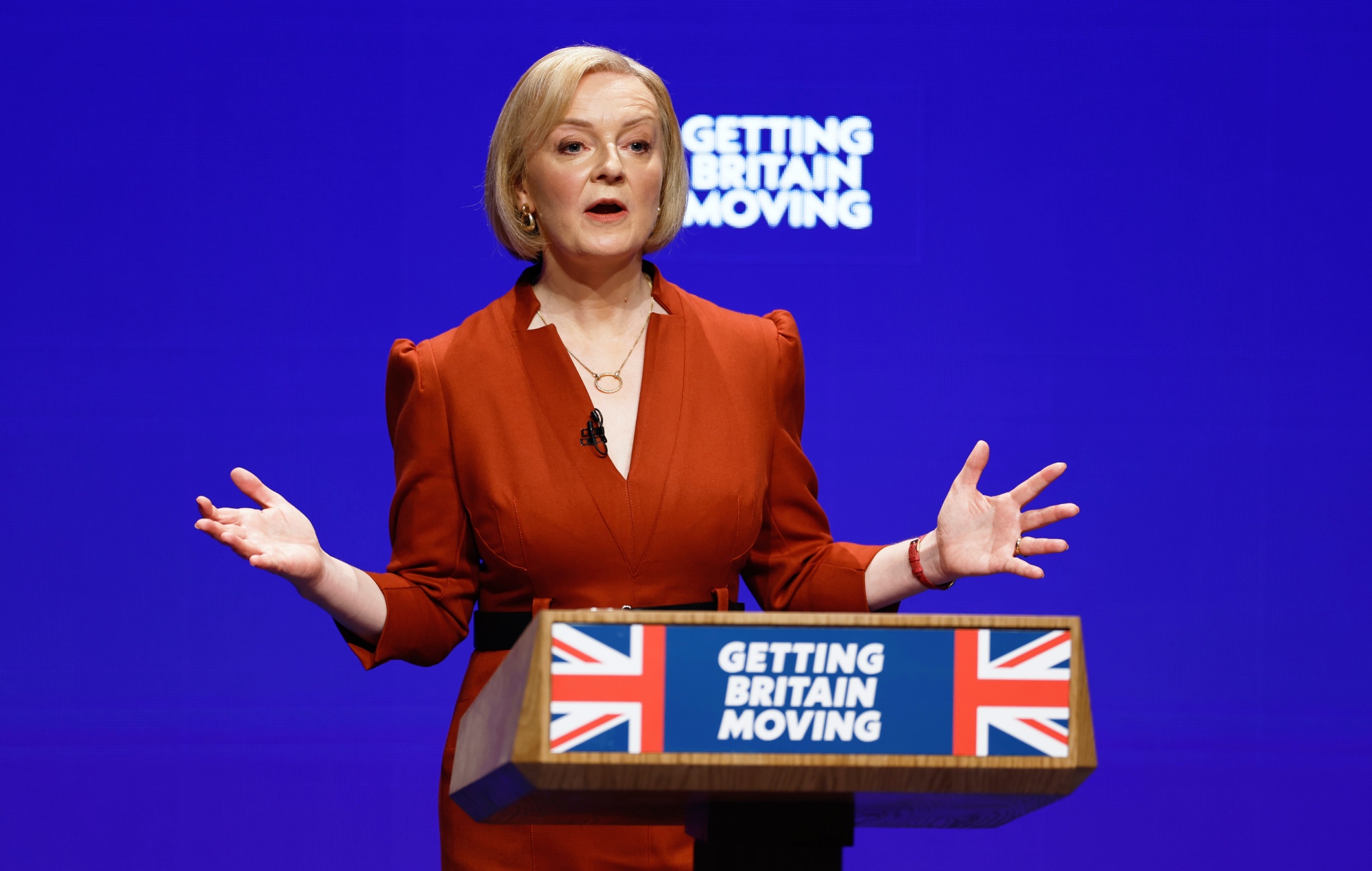 The PM delivered a 35-minute speech at the International Convention Centre (ICC) this morning. As the BBC notes, it was the shortest in-person conference speech by a Tory Prime Minister this century.

In it, Truss outlined her economic vision for the UK and said that she stood for “growth, growth, growth”. She also reiterated that the recent U-turn on plans to scrap the 45p tax rate for the highest earners was because it had become a “distraction”.

Addressing those who are worried about the economy, the PM said she is “working flat out” to make sure they get through the current crisis. “So let me be clear: we have your back,” she added. However, there was no mention of how last month’s mini-budget did nothing to help those on low incomes.

Truss took to the podium as M People’s 1993 hit single ‘Moving On Up’ played out over the PA. A slogan reading “Get Britain Moving” was displayed behind her. The song in question features the line: “Move right out of here, baby, go on pack your bags.”

She chose 'Movin' On Up' for her entrance song. Trying to distance herself from the last 12 years of Tory failure?

In response, ‘Moving On Up’ co-writer Mike Pickering tweeted: “So apparently we can’t stop Truss walking out to our song, very weird!”

He continued: “So sad it got used by this shower of a government. BTW Truss Labour used it with permission in 90s. I don’t want my song being a soundtrack to lies.”

James Small-Edwards, the son of M People singer Heather Small, is the Labour and Co-operative councillor for Bayswater in the City of Westminster. He said that Truss’ use of ‘Moving On Up’ was “an apt choice”.

Small-Edwards added: “This tired and out of touch Tory Government is indeed moving on out.”

Heather Small is yet to comment on the use of the single – NME has reached out to her representatives for comment.

So apparently we can't stop Truss walking out to our song, very weird! So sad it got used by this shower of a government. BTW Truss labour used it with permission in 90's. I don't want my song being a soundtrack to lies.

Elsewhere in today’s conference, Truss was interrupted by Greenpeace campaigners who held up a yellow sign reading: “Who voted for this?”. The protestors could be heard shouting, “Who voted for fracking?”

Greenpeace later shared a clip of the moment on Twitter. “Greenpeace activists have interrupted [Liz Truss’] speech at #CPC22 to denounce the prime minister ‘shredding’ her party’s 2019 manifesto promises,” the caption read.

“The PM is U-turning on fracking, strong climate action, and world-leading environmental protections. Who voted for this?”

The PM is U-turning on fracking, strong climate action, and world-leading environmental protections.

Who voted for this? pic.twitter.com/f2SSn7hBu3

Speaking to NME earlier this year, Heather Small recalled the time Boris Johnson referenced the lyrics to M People’s 1994 song ‘Search for the Hero’ while talking about his experience of COVID-19 and subsequent weight loss mission.

“At this moment in time, I am of immigrant stock, I’m working class, I’m Black, female and if a Conservative Prime Minister’s going to quote my words, I’ll take it! Everything I am doesn’t sit well with Conservatives all of the time,” she explained.

“And if you look at the strict immigration rules they want to put in place, I think to myself: there you are quoting the daughter of an immigrant. We bring something positive, we bring something different, and we bring a lot of hard work that should be acknowledged.”

The post Liz Truss walks on-stage to M People’s ‘Moving On Up’ at Tory Party conference appeared first on NME.

The first batch of ‘Pokémon’ Squishmallows have been released