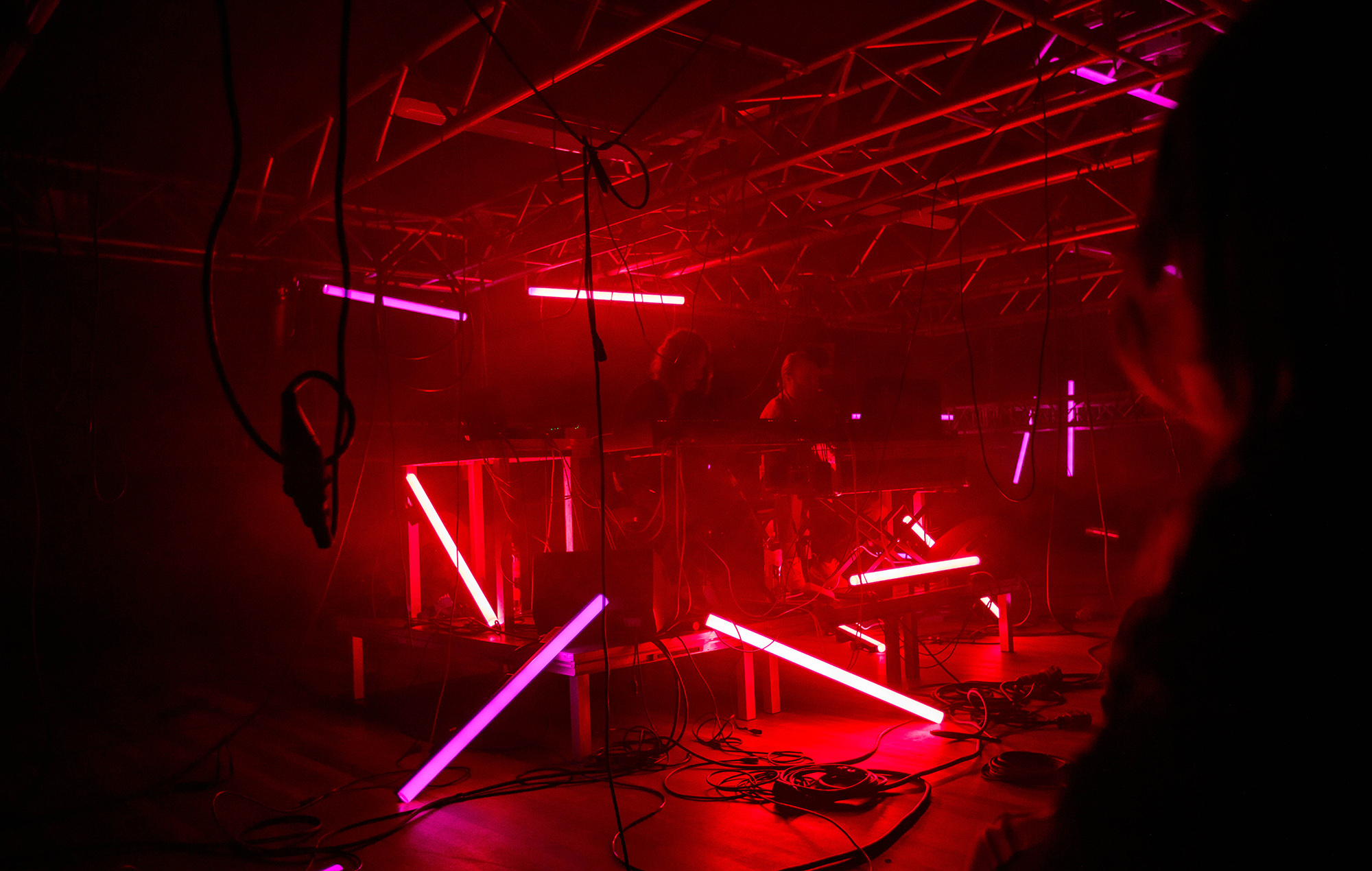 Six years ago Stranger Things slithered onto Netflix, the show’s fictional setting Hawkins, Indiana becoming home to gruesome demons, shadowy organisations causing havoc, and kids with superpowers. And yet, the way the show married kitsch ’80s throwback with unnerving horror, and a cast of characters you either love or hate with a burning passion, it became a surprisingly comforting and intriguing world to immerse yourself in: stylistically, musically, emotionally.

When Kyle Dixon and Michael Stein took on the role of crafting the original score to accompany the initial run they understood the brief; with big synths, melodramatic chords and soundscapes, it couldn’t have been more ‘80s. Their soundtrack – partly inspired by New Order’s more ethereal moments – is now synonymous with the show’s success.

As ADE – Amsterdam Dance Event – kicks off (October 19), Dixon and Stein offered up a rare live performance of their heralded score. De Brakke Grond, the towering theatre usually used for panel talks, has been transformed into our very own Upside Down, the other-worldly dimension where the gang’s darkest foes lurk.

The show begins with a flickering red fluorescent bar and sprays of a smoke machine, the lights expanding as two figures sit down behind a wall of synths, machinery and dry ice. Pulsating, ominous machine feedback is the first sign of life on the stage. Then there’s at least six minutes of pure, unadulterated dread in the form of thunderous synth drone, with the lights acting more and more erratic as the music gurgles and flutters. Finally respite arrives, albeit in the form of a sharp, high octave pierce, that’s soon replaced by the deep, tenor growl that’s been the backdrop for the first section. So far, so spooky.

Occasional glimpses of the title sequence provide ample fan service. Think of it as a deconstructed remix of the 30-second score and once they delve into that generation defining intro it’s truly beautiful. The whole room is flooded with flashing bars of light, and is as close to an out of body experience as any rave on offer in the Dutch capital this weekend.

Witnessing the pair bring their score to life on stage only confirms the importance of their role in the show’s success. Sure, the characters and storylines are strong but the grandiose of the score, its composition and how integral it is to painting emotion is what takes the set to the next level. When a harmonic gospel choir voice is introduced, it’s as if Season 4 baddie Vecna has a stranglehold on the room, as flashing strobe bars, the hiss of the smoke machine and the wall of sound take hold. Half dark. Half light. Pure majesty.

Pleasingly, the show feels like the extended cut of the score, the off-cuts that are too dark for TV take centre stage. The final moments are a slow lullaby interlude. As a grand pure-power synth emerges, it conjures memories of the episodes’ climatic moments: it’s Eleven running to Mike after she’s just saved the day; Steve and Dustin fist-pumping the air after the demogorgon has been banished from Starcourt Mall; Hopper and Joyce kissing for the first time.

The performance is a triumph, one that hits its stride when the positivity shines. Once you’ve waded out of the mire, the earnest spirit of the show – overcoming evil forces, unbreakable friendship – begins to emerge from the darkness and it all just clicks.

You Have to Check Out This Wild Halloween Light Show Featuring Metallica, ‘Ghostbusters’ Theme & More

The house, which goes by Magical Light Shows on Facebook and via its website, uploaded the 2022 edit

(G)I-DLE live in Singapore: K-pop quintet close the curtains on a tumultuous yet triumphant era