Skip to the content
HomeFeaturesEXID on their 10th anniversary and reunion for new release ‘X’: “We want to leave behind the most awesome music”

EXID on their 10th anniversary and reunion for new release ‘X’: “We want to leave behind the most awesome music” 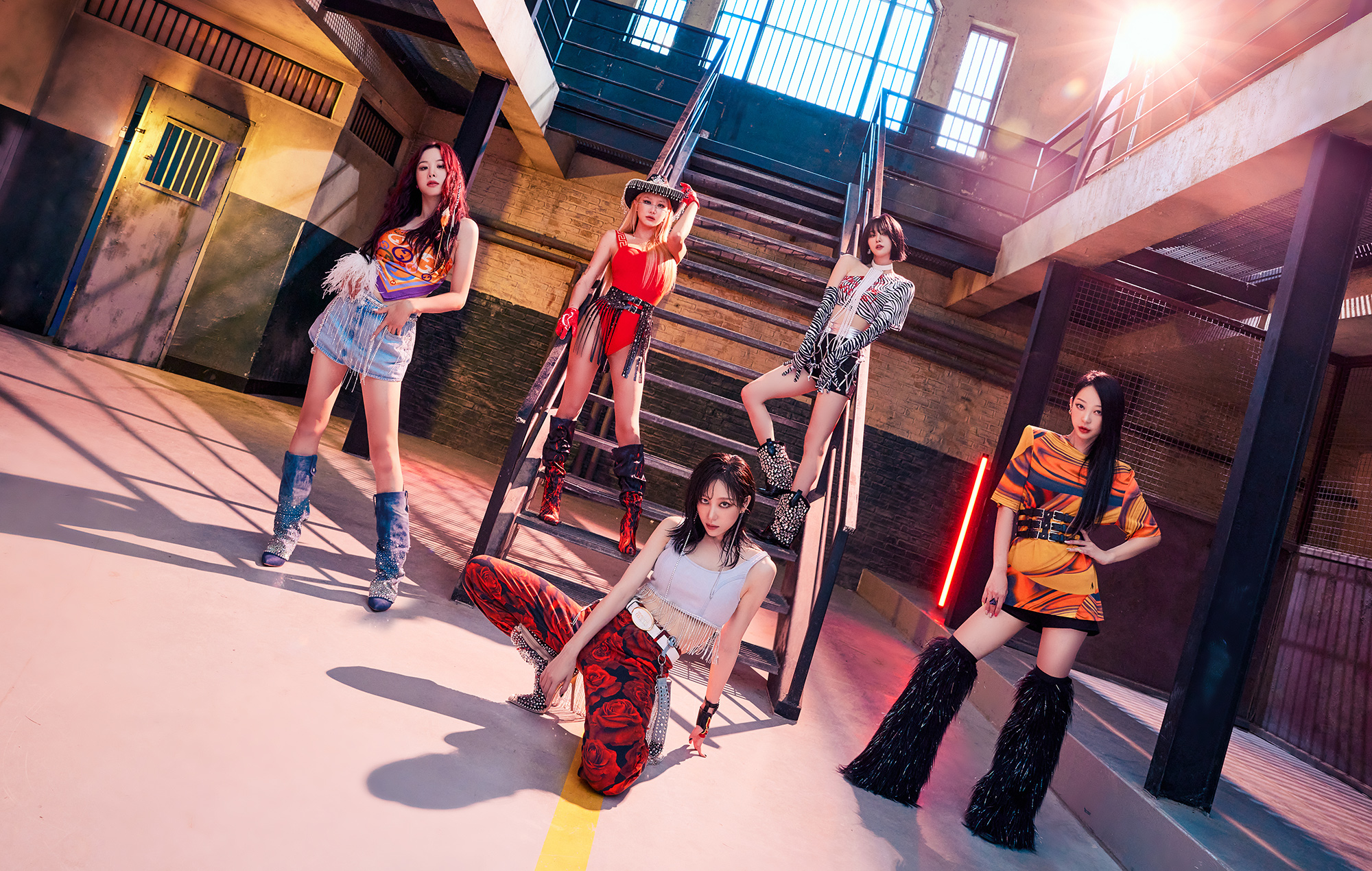 Between the release of EXID’s fifth mini-album ‘We’ in May 2019 and the announcement that the group would be going on an indefinite hiatus, fans began to wonder if the record would be their last. The quintet – comprising Solji, Elly, Hani, Hyelin and Jeonghwa – have spent the last few years pursuing solo endeavours, and for a time, it seemed unlikely that a comeback was on the cards for EXID. That was, until, the act made a surprise announcement in early September, later releasing commemorative single album ‘X’ and its fierce title track ‘Fire’ in celebration of their 10th anniversary.

“I can’t express the amount of happiness that we’re feeling,” EXID’s Solji says of the comeback. “We’re thankful and so happy that we were able to keep our promise that [‘We’] wouldn’t be the last, and that we would return.” The group’s leader and main vocalist – not to mention an appointed professor of Applied Music at Yong-In University – Solji unveiled her debut mini-album ‘First Letter’ earlier this year. While she remained as immersed in music as ever, the singer shares that she had longed to return to the stage as part of EXID – a sentiment echoed by all five members of the group.

Rapper and producer Elly – who also now produces music for rookie girl group TRI.BE – shares that while not too much about her daily life changed since EXID went on hiatus, the time alone gave her a newfound appreciation for her bandmates. “I came to realise how important and meaningful they are to me,” she confesses. “Personally, it’s been three years since I have last promoted as a singer,” adds youngest member Jeonghwa, a former child actress who returned to the acting industry during the group’s hiatus. “It gave me butterflies in my stomach just thinking about us spending time together as EXID.”

Despite how dearly the girl group have missed each other’s company, EXID firmly believe that their break was a catalyst for growth both individually and as a group. Hani, for instance, took on a lead role in last year’s Idol: The Coup drama series, in which she ironically starred as the leader of a failed K-pop girl group – an experience that allowed her to reflect on her time with EXID. “We were able to learn about ourselves, what we like, and what we dislike and see what direction we’d like to take with our lives,” she explains. “I believe that ‘X’ is a true reflection of how much we have grown, and how we were able to be ‘us’, so we were able to create this album with so much gratitude and appreciation.”

It’s not easy to make reunions like EXID’s happen in the K-pop industry, especially considering all the red tape that comes when members are represented by different agencies. The hardest part, EXID unanimously agree, was aligning their schedules to record the new three-song record. “In the past, my schedule was the group’s schedule, so we used to move as one. I realised it wasn’t so easy this time around,” Jeonghwa tells NME. The quintet was nothing if not determined to bring ‘X’ to life though, as Hyelin adds: “At the end of the day, we managed to pull through and we made sure we made time for each other, and for the group.”

Still, their newfound independence definitely has its perks. While Elly and longtime collaborator Shinsadong Tiger have always been integral to shaping EXID’s sound, on ‘X’ the group were “involved in the production and creative process more than ever before,” Solji reveals. Not only were they able to freely express their opinions on the music, Jeonghwa, Hyelin and Hani say, they also chimed in on the concept and styling for ‘Fire’.

In the spirit of celebrating their milestone release, we ask EXID to look back on the highs and lows of their decade together. Solji and Jeonghwa single out their breakthrough with ‘Up & Down’ – which skyrocketed the group to fame after a fancam of Hani’s performance of the song spread rapidly on the internet months after its release – as their most memorable moment. “I remember being so happy and overwhelmed with emotions because it felt like our efforts were being recognised by the world,” says Jeonghwa. Elly, who produced the hit single, adds: “I remember being dumbstruck and just so thankful we had gone viral at the time.”

That ‘Up & Down’ viral clip, no doubt, was one of the biggest ways in which EXID have shaped the K-pop industry today. “Whenever we saw so many different fancams being recorded as official content, I felt a bit proud and amazed at the same time that we had influenced this trend,” Hyelin says, while Solji proudly adds: “It naturally reminds us that we were the beginning of fancams, especially our Hani.”

As she reminisces, Solji goes on to offer her advice to junior acts, a growing number of which have experienced similar resurgent breakthroughs in recent years. “Rather than worry, we hope they enjoy the spotlight and shine as bright as they can. We remember being caught off-guard at the time… so we might not have enjoyed the moment fully,” she admits. “And most importantly! We want to tell them to make sure they take care of their health and heart, because there will be less time to sleep and less time for themselves as they become busier!”

After the success of ‘Up & Down’, EXID went on to release a string of hits like ‘Ah Yeah’ and ‘Hot Pink’. At the end of 2016, however, just two years after their breakthrough, Solji was diagnosed with hyperthyroidism. For the better part of the next three years, the act continued to promote as a quartet, with Solji occasionally joining them to record music or make surprise concert appearances whenever her health allowed.

“We all felt as if there was a button missing from a jacket, like we couldn’t fully button up,” Jeonghwa says, recalling their leader’s absence. “It was as if cold air was seeping through the gap and made us feel cold and empty.”

“Rather than worry, we hope [junior K-pop acts] enjoy the spotlight and shine as bright as they can” – Solji

Solji’s parts as main vocalist had to be divided among her bandmates. “I remember that my heart broke because I had to burden them, especially Hyelin,” she admits. But knowing her bandmates were in good health buoyed Solji through the challenging recovery process. “I am just so thankful that [EXID] were able to pull through for me at the time, and their performances and presence became a huge pillar of support for me.”

“I feel so sorry I couldn’t be more of a strength to Solji. I always thought there could’ve been more that I could have done to help,” Hani says regretfully, though she later adds that Solji’s optimistic attitude gave her great strength to keep pushing on. “We were all able to feel her spirit and love and warmth from afar,” Elly agrees. “It was like she was with us, even [during the times] she wasn’t.”

How have EXID weathered these storms to make it to a decade of existence? Jeonghwa credits their unity as EXID: “As a team, we respected one another, valued, and loved one another.” Their fanbase, also known as LEGGO, have also been a constant source of strength.“We reflect on how we could reciprocate the love, or how we could work harder to make sure we don’t disappoint our fans,” she adds, voicing her excitement for the group’s upcoming 10th anniversary fanmeeting in Seoul. “LEGGO have given us the greatest motivation to continue to work hard and give back the love that we have received.”

And what of EXID’s future? “We are EXID. This is us. Even if 10 or 20 years pass by, I think each and every single one of us will be the same,” Elly declares. And while there’s no telling what might come next for the group, Solji makes her hopes for the future clear: “We want to leave behind the most awesome music. And I want to simply say that we’d like to have the beautiful hearts of EXID and LEGGO live on forever.”

The post EXID on their 10th anniversary and reunion for new release ‘X’: “We want to leave behind the most awesome music” appeared first on NME.