Skip to the content
HomeK-popBTS live in Busan: a dizzying celebration of a once-in-a-lifetime act

BTS live in Busan: a dizzying celebration of a once-in-a-lifetime act 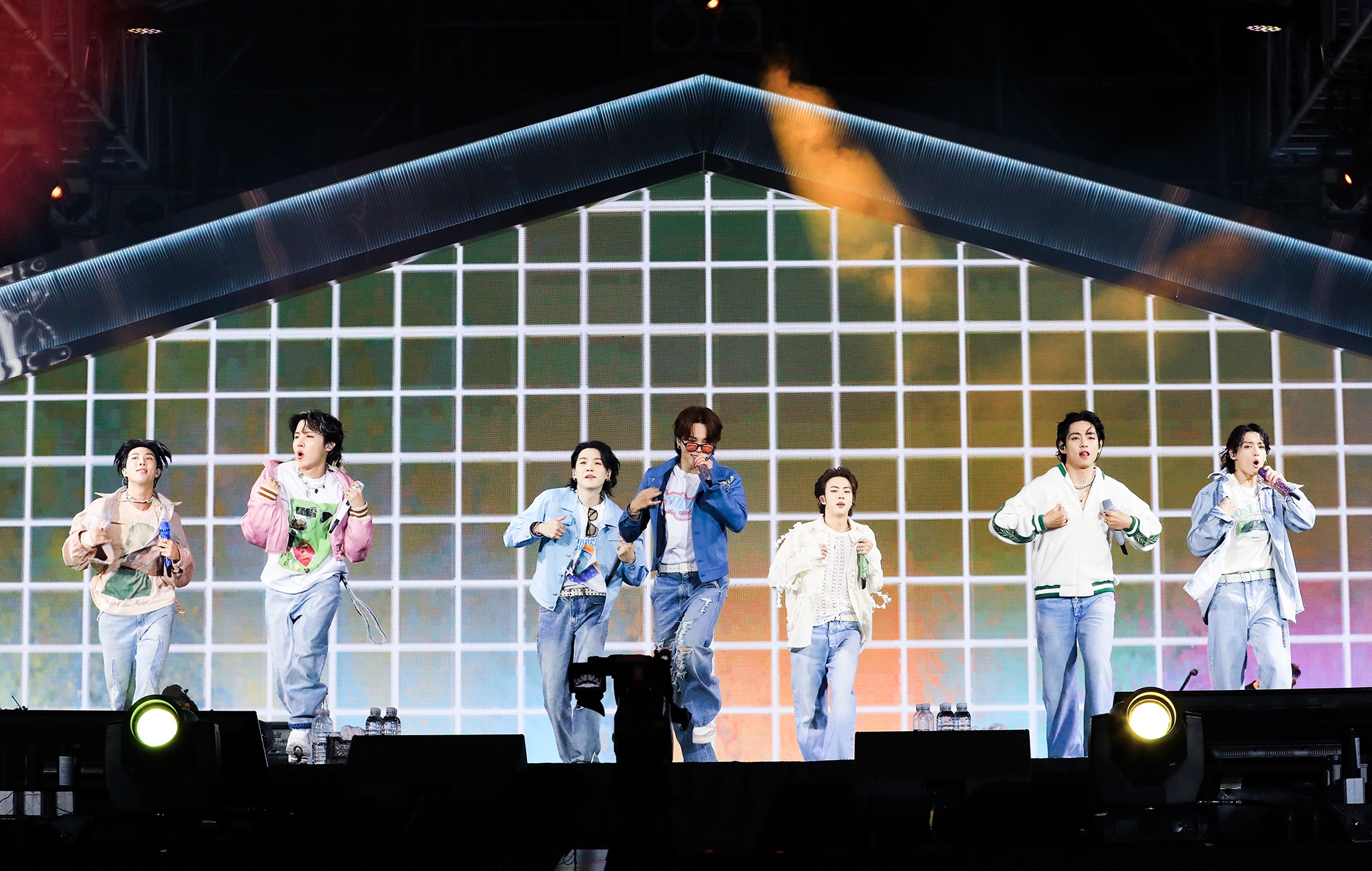 Reflection has been a recurring theme for BTS so far this year. In June, the unstoppable seven-piece released ‘Proof’, an anthology album that looked back on their nine years together so far. The video for its lead single, ‘Yet To Come (The Most Beautiful Moment)’, gathered iconography from years gone by, and even J-hope’s debut solo album ‘Jack In The Box’ found the rapper contemplating his journey so far and where he goes next. Although the name of tonight’s (October 15) concert – ‘<Yet To Come> in BUSAN’, in aid of the city’s World Expo 2030 bid – hints at a future-facing approach, it also feels like a continuation of this recounting of all that’s happened so far.

This isn’t just a mere retelling, though, but a celebration of an incredible first epoch. The stage at Busan Asiad Main Stadium is adorned with the BTS logo in repetition, each time its trapezoid-shaped halves set one step back from the logo before it. It resembles something like the pages in an open book, every block representing a different chapter in the group’s story. On either side of the performance area are those same signposts to moments throughout their career that appeared in the ‘Yet To Come’ video – the train from ‘Spring Day’, the angel from ‘Blood Sweat & Tears’, and more.

After an arsenal of fireworks is unleashed skywards from that set-up, the seven members of BTS bound on stage and launch into ‘Mic Drop’. They’re backed by a live band, beefing the song up until it feels like an oncoming avalanche. Perhaps it’s this accompaniment that makes the group’s energy feels different compared to the last time they were on stage in Las Vegas six months ago – BTS are artists that always give their all, but tonight it feels like they dig harder and deeper than ever.

That phenomenal passion and effort has allowed the band to put Korean culture on the global stage over the last nine years, and the setlist in Busan gives them another opportunity to continue that work. On ‘Ma City’, backed by shots of Gwangan Bridge and other landmarks in the coastal city, the group detail their hometowns across South Korea. ‘Idol’ – rearranged tonight with a bassline that sounds deeper and more elastic than before – is accompanied by two figures of talchum, or masked dance, looming out from the front of the stage over the crowd.

As well as representing their country, there have always been two strong threads through BTS’ catalogue – poignant songs that put you deep in your feelings, and swaggering, fierce hip-hop. Tonight, the group splits in two to showcase both. The vocal line of Jin, Jimin, V and Jungkook go first to deliver flawless, spine-tingling renditions of ’00:00 (Zero O’Clock)’ and ‘Butterfly’, each of their distinctive voices soaring majestically through the night sky. Afterwards, rappers RM, Suga and J-hope take their places on the stage and threaten to burn it to the ground with intense, impressive versions of ‘UGH!’ – each utterance of its title punctuated by plumes of fire – and ‘BTS Cypher Pt. 3: Killer’. Both are nothing short of jaw-dropping, the trio flexing their rapid-fire flows, ferocious attitudes and lyrical dexterity.

Elsewhere, there are other gems from their illustrious back catalogue. ‘Dynamite’ – their first US Number One single – lights up the stadium in rainbow-coloured euphoria before an ever-infectious and feel-good run-through of ‘Boy With Luv’. Towards the end of the set, ‘Young Forever’ and ‘Spring Day’ provide moments of tenderness. At the time of its release in 2016, the former bottled the group’s determination and passion to achieve their goals. Sung now, as they stand on stage in the first phases of their second chapter, it feels like a renewal of their pledge to “keep running toward my dream” – even as they rank among the biggest artists in the world.

As ‘Young Forever’ suggests, BTS have never been a band to do things by halves and the production of this one-off concert reinforces that. The two-hour show is a sensory overload, from the constant explosions of fireworks down to the attention to detail. During ‘Butterfly’, one example of the titular creature flaps around gracefully to the side of the stage, while the graphics in ‘BTS Cypher Pt. 3: Killer’ change to represent each member – ‘Jack In The Box’ colours for J-hope, phrases like “persona” and “who am I” for RM, a splatter of blood and sword noise à la ‘Daechwita’ for Suga.

The past isn’t the only period on display in Busan. There is present, too, with the three new songs from ‘Proof’. The rumbling and revving ‘Run BTS’ arrives early on for its live debut, complemented by choreography that puts the members behind the handlebars of invisible motorbikes. In the show’s final throes, ‘For Youth’ strikes a wistful, grateful tone as the screens show film strips decorated with shots from past concerts.

There’s some focus on the future, too. During the ending moments, Jin announces that he will soon be the next member to share solo material, with a single on the way soon. ‘Yet To Come’, meanwhile, wraps up the setlist with its moving but optimistic message that, even with all the peaks that have coloured the last near-decade, BTS’ best days are still on the horizon.

Earlier this year, when the group announced their plans to work on individual projects, the world went into overdrive, misunderstanding the news as the end of the BTS as a band. On stage tonight, the members emphatically denounce those reports, Jimin telling the crowd: “I believe what we’ve done so far is just a taste. We should keep going – 30, 40, 70 years.” As the band wave goodbye minutes later, one lyric from ‘Yet To Come’ shines on the screen behind them: “Rest of my life.” If this is only the beginning for BTS, those decades to come promise to be nothing short of breathtaking.

The post BTS live in Busan: a dizzying celebration of a once-in-a-lifetime act appeared first on NME.