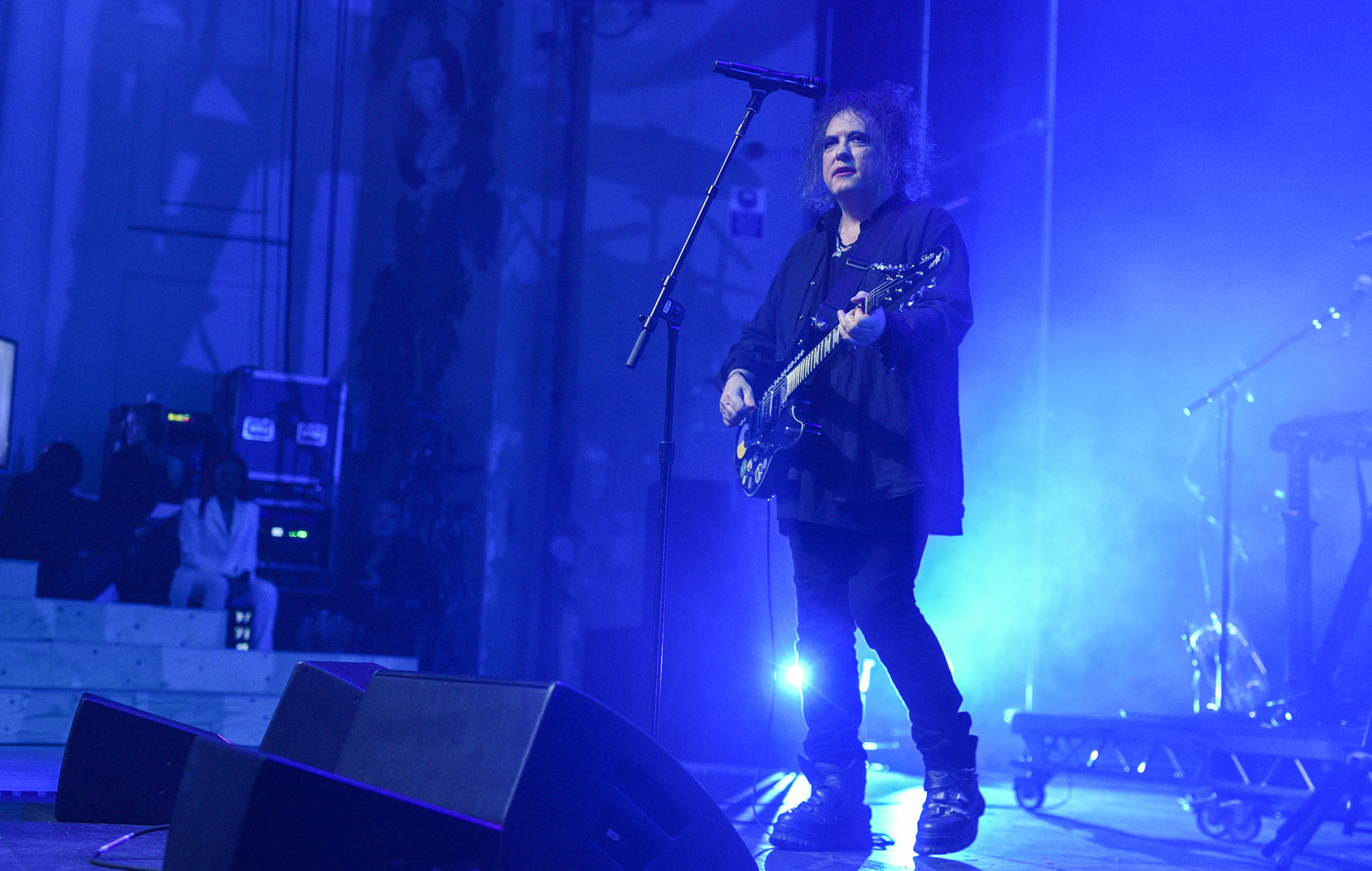 The Cure kicked off their 2022 world tour in Latvia tonight (Thursday October 6), debuting two new songs and welcoming guitarist and keyboardist Perry Bamonte back to the band. Check out footage and the setlist below.

The icons, supported by now-regular touring partners and one of frontman Robert Smith’s favourite bands The Twilight Sad, began their long run of 2022 dates with a show at Arena Riga in Riga this evening – airing two new songs fans assume are from their long-awaited new album, ‘Songs Of A Lost World‘.

Opening their 25 song set – where they were also joined by Bamonte, returning to the band having been a member between 1990 and 2005 – The Cure started with the sprawling and bittersweet ‘Alone’; a tender track that saw Smith begin with the line: ‘This is the end of every song we sing‘.

At the end of the first set, which included classics and fan favourites such as ‘Pictures Of You’, ‘Trust’, ‘Fascination Street’ and ‘In Between Days’, The Cure debuted another new song ‘Endsong’ – a much more sombre number where Smith lamented how ‘it’s all gone‘ repeatedly, in a life with ‘no hopes, no dreams, no love – I don’t belong‘.

The band then returned for more more encores, delivering the likes of ‘Plainsong’, ‘Close To Me’, ‘Friday I’m In Love’ and ‘Boys Don’t Cry’.

The new songs are excellent. #TheCureLostWorld22

The Cure’s setlist was:

Having long teased the band’s long-awaited “merciless” new record – after telling us that two new albums were on the way back at the last NME Awards back in 2020 – Smith revealed to NME earlier this year that one of them would be “real very soon” and would be called ‘Songs Of A Lost World’.

Then in May, the frontman offered that the album was almost complete, hoping that new material would be out by the tour kicking off in October.

“Essentially it’s a 12 track album,” he told NME. “It’s there, it’s kind of half-mixed and half-finished. It’s a weird thing. It’s kind of evolved over the last two years. It hasn’t always been a good thing to have been left alone with it. You pick at it, like picking at seams, and everything falls apart.

Smith continued: “It’ll be worth the wait. I think it’s the best thing we’ve done, but then I would say that. I’m not doing an Oasis when I say that, ‘IT’S THE BEST FOOKIN’ ALBUM’. A lot of the songs are difficult to sing, and that’s why it’s taken me a while.”

Discussing the themes and character of the long-awaited follow-up to 2008’s ‘4:13 Dream‘, Smith said that the album “doesn’t have very much light on it” and that it sounds “more like ‘Disintegration’ than ‘Head On The Door’.”

“It’s pretty relentless, which will appeal to the hardcore of our audience, but I don’t think we’ll be getting any Number One singles off it or anything like that!” he laughed. “It’s been quite harrowing, like it has for everyone else.

“I’ve been more privileged than most, but lockdown and COVID has affected me in as much as I’ve lost an entire generation of aunts and uncles in under a year. It’s things like that which have informed the way I’ve been with the record.”

Smith added: “Essentially we recorded two albums in 2019. I’ve been trying to finish two at the same time, which is pretty much impossible. One is nearly ready to go.”

Smith’s last public performances were for the BandLab NME Awards 2022 – where he picked up the Best Song In The UK Award for his Chvrches collaboration ‘How Not To Drown’ and after performed the track together live for the first time along with a cover of The Cure’s ‘Just Like Heaven‘ – and then again for a repeat performance of the songs with Chvrches at their Brixton Academy headline gig a week later.

The Cure’s 2022 European tour continues in Helsinki on Saturday October. Their return to the UK and Ireland for a run of shows in December. Visit here for tickets and more information.

The post The Cure debut new songs and welcome Perry Bamonte back to band as they kick off 2022 tour appeared first on NME.

The Bleachers singer wants venues to stop taxing merch for artists, as it's "the only way you make m