Skip to the content
HomeFeaturesSeulgi: “Everybody has a little bit of good and evil in them”

Seulgi: “Everybody has a little bit of good and evil in them” 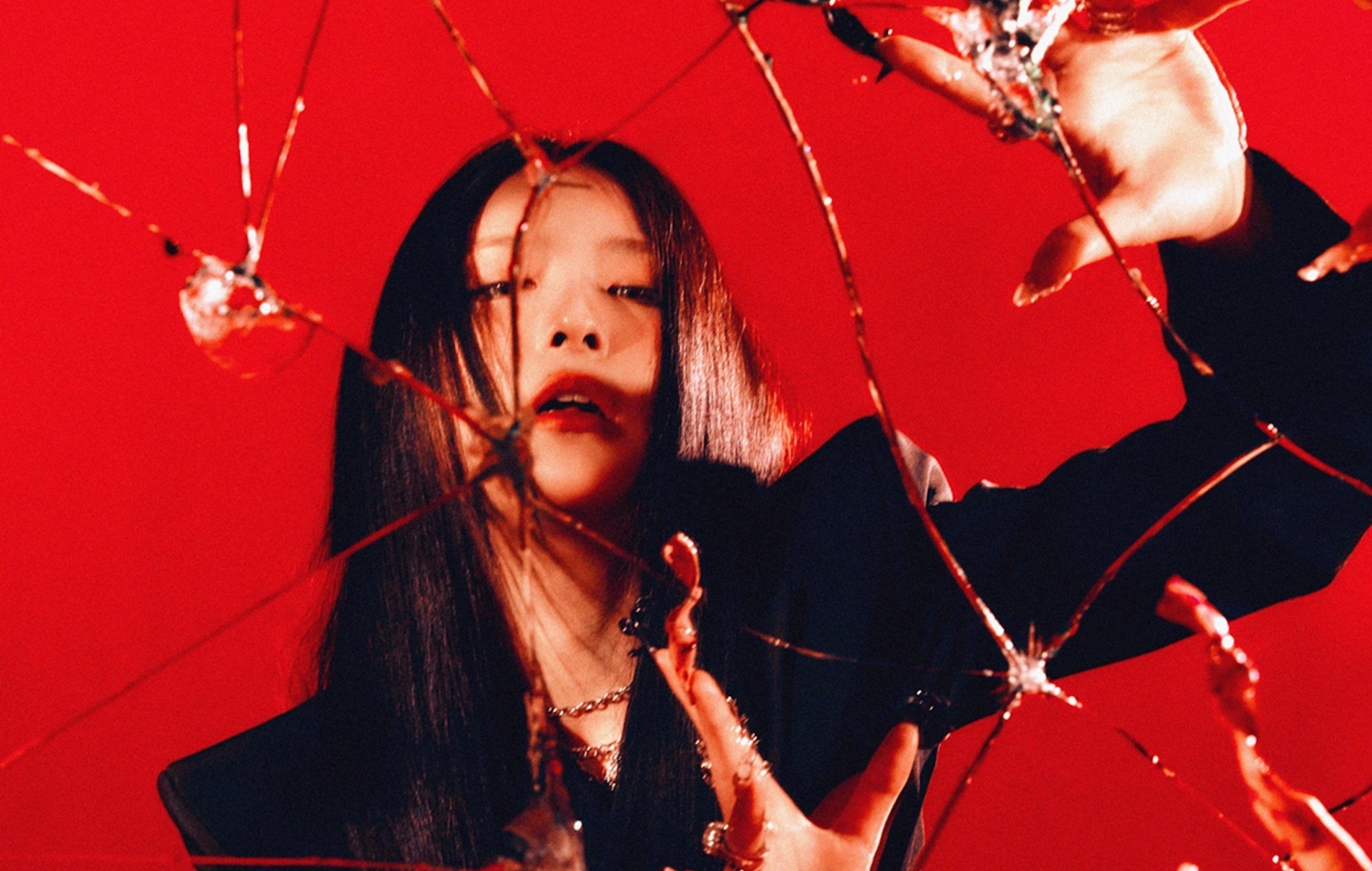 A huge explosion erupts in a field, sending a battered old car up in flames. Thick smoke billows far above the ruined vehicle and the scorched earth around it. Standing before it all is Seulgi, her face scratched and bruised. She flinches as the blast goes off, eyes darting suspiciously as she hurriedly walks away from the scene.

The moment forms just four seconds of the album trailer for the Red Velvet singer’s debut solo mini-album, ’28 Reasons’, but it – and the rest of the haunting visual – make a huge impact. Although longtime fans will know of the star’s love of horror movies, the ominous character she plays in the trailer is firmly at odds with the demure image the general public associate her with.

Darkness fills Seulgi’s first solo release, from the trailer and the gloomy messages on the schedule poster (“Good and evil people coexist within one person”) to the brooding sounds throughout the record. “I definitely want to show a juxtaposition from the Seulgi who has a very kind image visually,” the 28-year-old tells NME days before its release. She’s leaning on a table in SM Entertainment’s offices, the black of night smothering the bustle of Seoul’s streets through the window behind her. “With this EP showing more of a mischief and dark troublemaker vibe, it brings up that contrast.”

The title track – a shadowy dance-pop gem driven by a low, rumbling bassline – leans into the ideas that schedule poster hinted at. It presents someone who is both a little bit good and a little bit bad, highlighting the complexities in humans and our relationships, and the idea that no one is strictly at one end of that spectrum.

“Everybody has a little of good and evil [in them], and some people think and wonder about vices, sins and greed – but often we only try to show the good side to society,” Seulgi reasons. Instead of sticking to that accepted version we present to the world, she decided to “experiment” and indulge in the unseen “bad” side of a character.

There has been some precedence for the darkness of ‘28 Reasons’. In 2020, Seulgi teamed up with bandmate Irene for their acclaimed sub-unit release, ‘Monster’. “‘Monster’ has a very similar colour and a similar amount of darkness that you can see in ’28 Reasons’, so I feel like [this record] is one step further than ‘Monster’,” she explains. “So it was a good transition.”

’28 Reasons’ feels most menacing air on the alluring yet sinister ‘Dead Man Runnin’’. Ever felt like someone else has razed your life to the ground? This song sinks into that sensation and the instability that follows. It’s the first time that Seulgi participated in the songwriting of one of her releases. To get herself in the mindset of that story, she immersed herself in a specific subset of films. “I watched a lot of movies about villains, like Joker, where a lot of antagonists are highlighted,” she shares. “The demo sounded like the scene right before the villain [appears on screen], so I wanted to build up that feeling.”

“Can I request to give a big shout-out in the article for how amazing the members are? I love you, Red Velvet!”

When the topic of songwriting comes up, Seulgi – already warm and enthusiastic throughout our interview – lights up even more. She talks at length about the process, having to pause mid-way through her excited answers so the interpreter by her side can catch up. As she speaks, it becomes clear just how much thought and attention to detail she poured into her lyrics.

“Songwriting isn’t just about filling a song out with words,” she begins. “I had to think about what it would sound like when I mouth them out – will the Korean and English words be natural when they’re sung together? Will it be easy to sing, given the intonation? I had to use words that I don’t normally use in my colloquial speech, so I realised songwriting is a really challenging path.”

It wasn’t always guaranteed that Seulgi would write the lyrics for ‘Dead Man Runnin’’. Instead, she had to submit her work to the label through a blind test, competing against attempts by other songwriters. “The producers and the company chose and filtered the lyrics and they didn’t know it was written by me,” she says, grinning. “But many people said that the song and lyrics went really well together, so I was really happy and felt recognised from the evaluation.”

It wasn’t just the staff at SM Entertainment who were impressed by Seulgi’s work. Though keen to show who is as a solo artist with ’28 Reasons’, she still relied heavily on her Red Velvet bandmates for support while making the record. Each member listened to the tracks she was working on as she went, giving her feedback. Their positive reactions filled her with confidence.

“I was very unsure when I first decided to do a solo debut, but the members really gave me a lot of energy,” she says fondly. “I’m usually very dependent and reliant on the members, so standing alone for the first time was a big challenge.” After the interpreter finishes translating her words, she raises her hand. “Can I request to give a big shout-out in the article for how amazing the members are?” she asks, falling back into her chair, laughing at herself. “I love you, Red Velvet!”

It’s been eight years since Seulgi debuted with the group. In that amount of time and in such a competitive field as the K-pop industry, has she experienced moments that match the mood of ’28 Reasons’? Quite the opposite, Seulgi says. “As you know, in K-pop there are a lot of desires and greed, and not everybody gets to achieve the dreams they want,” she muses.

“We’ve also seen cases where the well-being of some artists is not well cared for. Fortunately, I’ve received so much love and support and those constant fortunes have helped me stay strong and stick to the good, and not fall into a dark place. I like to say I’ve grown well, without any troubles or hardships.”

Since debuting, Seulgi has proven herself to be a powerful vocalist and a brilliant talent – likely two reasons why she was selected earlier this year to be a part of the SM supergroup GOT The Beat, alongside Red Velvet’s Wendy, aespa’s Karina and Winter, Girls’ Generation’s Taeyeon and Hyoyeon, and iconic soloist BoA. When NME mentions the project, Seulgi lets out an awestruck “wow”, as if she still can’t quite believe that was real.

The GOT The Beat experience was a meaningful one for her, not least because she got to work with some bonafide K-pop legends. “I was really honoured to be invited to be a part of that project and this cross-generational group is the kind of combination you can only see at SM Entertainment,” she says. “Seeing the fresh, young, energetic vibe from aespa and the professional experiences and well-developed skills from Girls’ Generation and BoA in the same place was an amazing opportunity.” Although GOT The Beat only released one single, ‘Step Back’, before moving on to other projects, she suggests it might not be the last we’ve seen of them. “Perhaps you can see more of GOT The Beat – or similar projects – in the future,” she says.

For now, though, Seulgi is focusing on carving out her own path even as she contributes more brilliance to Red Velvet. As she prepares to wrap up her day, she shares hopes for her future that include more writing and more opportunities to develop her sound and strengths. “I also hope that perhaps I could be a source of inspiration for someone else, or for some other artists,” she adds shyly. With ’28 Reasons’ under her belt, there’s no doubt she’ll achieve that goal.

The post Seulgi: “Everybody has a little bit of good and evil in them” appeared first on NME.