Skip to the content
HomeGame Reviews‘Scorn’ review: stranger in a strange land 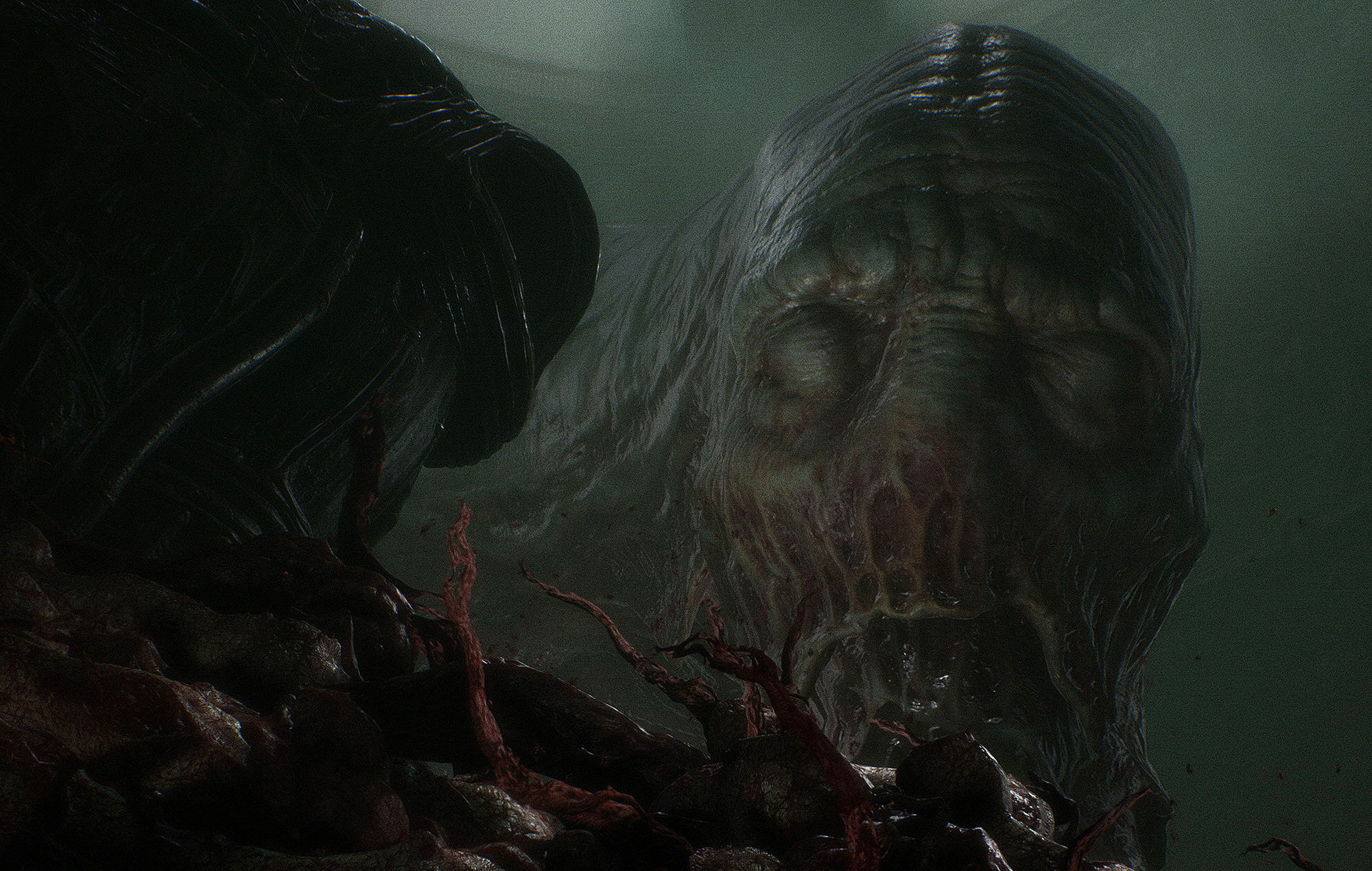 I miss my egg friend. While technically a survival horror, Scorn is a completely alien game, and the cursed misshapen humanoid stuffed into an egg was the only thing approaching a relatable face in the entire playthrough. This wretched half-person was jammed into an egg I retrieved from a wall in one of the first of Scorn’s myriad overcomplicated puzzles, and then became a puzzle himself, before I cut him out of his prison-egg and set him free.

This sort-of escort quest made sense to my video game sensibilities, but the further I got from egg friend’s gaze, the less sense everything made and the further into the nonsensical Scorn ventured. Simply put, Scorn is unlike anything I’ve ever played, eschewing a lot of the mechanical and narrative tropes of the medium to create something fascinating that spends a lot of time getting in the way of players enjoying the gorgeous world of Scorn.

Scorn is a beautiful game. While it owes a lot of its biomechanical ick to Swiss artist H.R. Giger, it’s well realised and looks the part. Most of Scorn has you strolling around dark corridors that glisten and undulate, assailed by a series of creatures that are on a scale, sitting somewhere between a sentient cocktail sausage and a wet bit of intestine. This shouldn’t work. Scorn threads together body horror, Giger-esque biopunk, piles of corpses and meaty grossness into a cohesive world, and it really does look like nothing else. Towards the middle of the game you’ll find yourself standing on a balcony looking out over a foggy expanse while something groans in the distance. Haunting moments like this are the best Scorn gets.

Better yet, Scorn revels in that weirdness. There’s no voice lines in the game and it basically refuses to explain itself at any point. There are also no text logs, and there’s basically no way of digging into the lore at any point and I don’t even know what the enemies are called. You heal by using a weird sponge that carries your health and I don’t even know how to refer to it. It also refills your ammunition. It’s hard to make sense of Scorn and there’s a real sense that the game is happy to remain mysterious.

Sadly, this sense of mystery leads to one of Scorn’s biggest issues: in trying to avoid handholding, the developer has managed to create a game that doesn’t really explain anything. I spent hours banging my head against puzzles I hadn’t gotten my head around, but also I just got lost in corridors with bad signposting, or turned around trying to work out whether something was an invisible wall or something I could edge around.

There’s an established system for this, too. Letting the camera pull focus for just a second would help with indicating where you’re supposed to go next, or just letting you know that you’re barking up the right tree as you try to crack another tough puzzle. Some people may argue that being left completely to your own devices is part of the magic of Scorn, but bashing your head against a series of puzzles and hoping you stumble upon the solution frankly isn’t fun and it’s going to stop a lot of people from truly enjoying Scorn’s weirdness for themselves.

I had difficulty with the combat, too. Scorn’s combat is so clunky and unpleasant that it feels like it would be a better time if you didn’t have to fight anyone. Many of Scorn’s enemies fire long distance projectiles with a similar attack pattern as they “spin up” their attack before launching a projectile you can dodge by strafing. This is incredibly difficult with the floor detritus and cramped quarters you’ll be stuck in for most combat encounters, and if any game was screaming for a dodge button, it’s this one.

Follow this with some of the least satisfying weaponry in video games – your piston jackhammer can attack at close range twice before it needs time to recharge, while the most common enemy in the game takes five hits to kill, all the while it’s spitting acid at you from range – and it combines to a game that feels clunky not as a choice, but as some sort of punishment.

Then there’s a boss fights, which follow a similar pattern of waiting until the right moment to attack and then attacking. Except the enemy in question has a grenade launcher. Biomechanical, of course.

Sadly these two issues combine to make Scorn a very patchy experience and one that I often didn’t have a lot of fun with. Despite this beautiful world and the mystery it offers, actually playing Scorn just isn’t a good time, and that makes it hard to recommend, no matter how unique the offering is here.

Scorn launches on October 14 for PC and Xbox Series X/S.

Scorn brings together a beautiful world and alluring mystery with some confusing design choices that really hinder how much fun it actually is. Scorn may well be one of a kind, but you have to wonder if the title is derived from the contempt they feel towards the people actually trying to play it.

The post ‘Scorn’ review: stranger in a strange land appeared first on NME.

‘The Whale’ review: Brendan Fraser shines but this is clumsy at best

‘Decision To Leave’ review: the year’s most addictive K-drama so far