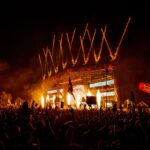 What is the secret to longevity? Is it the strength of product and brand, the ability to adapt to changing times, having your finger on the pulse, some combination of all of the above? Whatever the secret is, there is no doubt that Pasquale Rotella and his creative team at Insomniac have the formula down pat. Witness another stacked and packed edition of Nocturnal Wonderland, North America’s longest running rave, which went down earlier this month at Glen Helen Regional Park in San Bernardino.

There wasn’t really too much difference about this year’s edition to differentiate it from previous editions of the festival. However, in the case of Nocturnal, that doesn’t really matter. When we last attended Nocturnal in 2019, prior to the unforeseen (at the time) global pandemic, it was thought that that would be Nocturnal’s last edition at its long-time home. Fast forward three years, and it’s impossible to imagine Nocturnal taking place anywhere else but Glen Helen. From its pristine outdoor setting, insane hilltop views, soft green grass all around, there really is something magical about Nocturnal Wonderland that Insomniac’s other festivals just can’t capture.

Let’s get into what stood out at this year’s edition of Nocturnal. First off, the Wolves’ Den (main stage) was extremely impressive. This year’s stage design was simple but sleek. The Nocturnal Wonderland marquee was gone from the stage this year. Video panels formed a half-circle in the center of the stage where the artists’ main visuals would be displayed. In the outer half-circle, a wheel spun that featured a waning and waxing moon. Three rectangular video panels descended on each side of the stage’s half-circle center. There was also more pyro and lasers than I’ve ever seen at Nocturnal. The main stage truly was a sight to behold and headliners got treated to a nice fireworks display at the end of each night.

Visually, the Labyrinth stage was just as impressive. This year’s version featured cube-shaped stage ends bookending three rectangular video panels in the center of the stage. The lasers were absolutely going off at this stage. Despite being the Bassrush stage with its high intensity head-banging, it’s actually a great spot to catch a breather, grab some food and sit on the top of the hill and enjoy the insane view you get. Seeing the sun peak over the mountains as it sets is truly an unforgettable sight.

What about the music, you ask? There was never a dull moment, Night 1 featured a lot of bass-house, dubstep and trap. I caught sets from Jack Beats + Taiki Nulight Present: Reel Mood, Moksi, Adventure Club, Yellow Claw and Illenium at the main stage. I also made my way up to the Labyrinth stage for sets from Trivecta, Must Die! b2b Tisoki, Saymyname and Sullivan King. The energy of the crowd was incredible as every imaginable strain of bass music was pumped out through the speakers. The lasers and pyro were on point at the second stage in a way I’ve never seen. Thankfully so, the sound on the first day kind of sucked. It was super bass-boosted and you couldn’t really hear any mids. It appears they got that worked out for Day 2 as the sound was much crisper.

The lineup on Day 2 was absolutely stacked and the crowd vibes were far superior to Day 1. While house music was plentiful, so were Moombahton, mid-tempo and big main stage sets. With the exception of going to see Blanke up at Labyrinth and Dillon Francis perform a highly-anticipated DJ Hanzel set at Sunken Garden, I spent the entire day at the Wolves’ Den. And why wouldn’t anybody? I got the day started with a nasty set of bass-house from Disco Lines. By the time I’d returned to the Wolves’ Den after sundown, JSTJR had taken over the mainstage dropping an energetic mix that is nearly impossible to not dance too. My personal favorite set of the weekend had to be R3HAB, who 11 years after he first performed at the festival, took fans on a wild ride of big room hits, old school classics, and future rave remixes. Dillon Francis was up next and he did not disappoint as he also dusted off the moombahton and dropped some new music amongst his many festival classics. REZZ closed out the night and she took the house down with her pummeling brand of mid-tempo, you could truly feel the bass in your chest for her set.

There you have it, the 27th edition of Nocturnal Wonderland was a resounding success! Will it be back next year? It hasn’t been announced yet, but I’d be shocked if it weren’t. Since I didn’t camp, we didn’t even explore how fun an aspect that is to this festival. I think it’s a safe bet to say that North America’s longest running rave will continue its reign. So long as Insomniac continues to provide the amazing experience that is Nocturnal (and camping too!) there’s no reason to think the magic won’t continue!

Last month, Rezz inaugurated her new label HypnoVizion with the release of Nightmare on Rezz Str

‘The Guardians Of The Galaxy Holiday Special’ review: deck the halls with Marvel magic