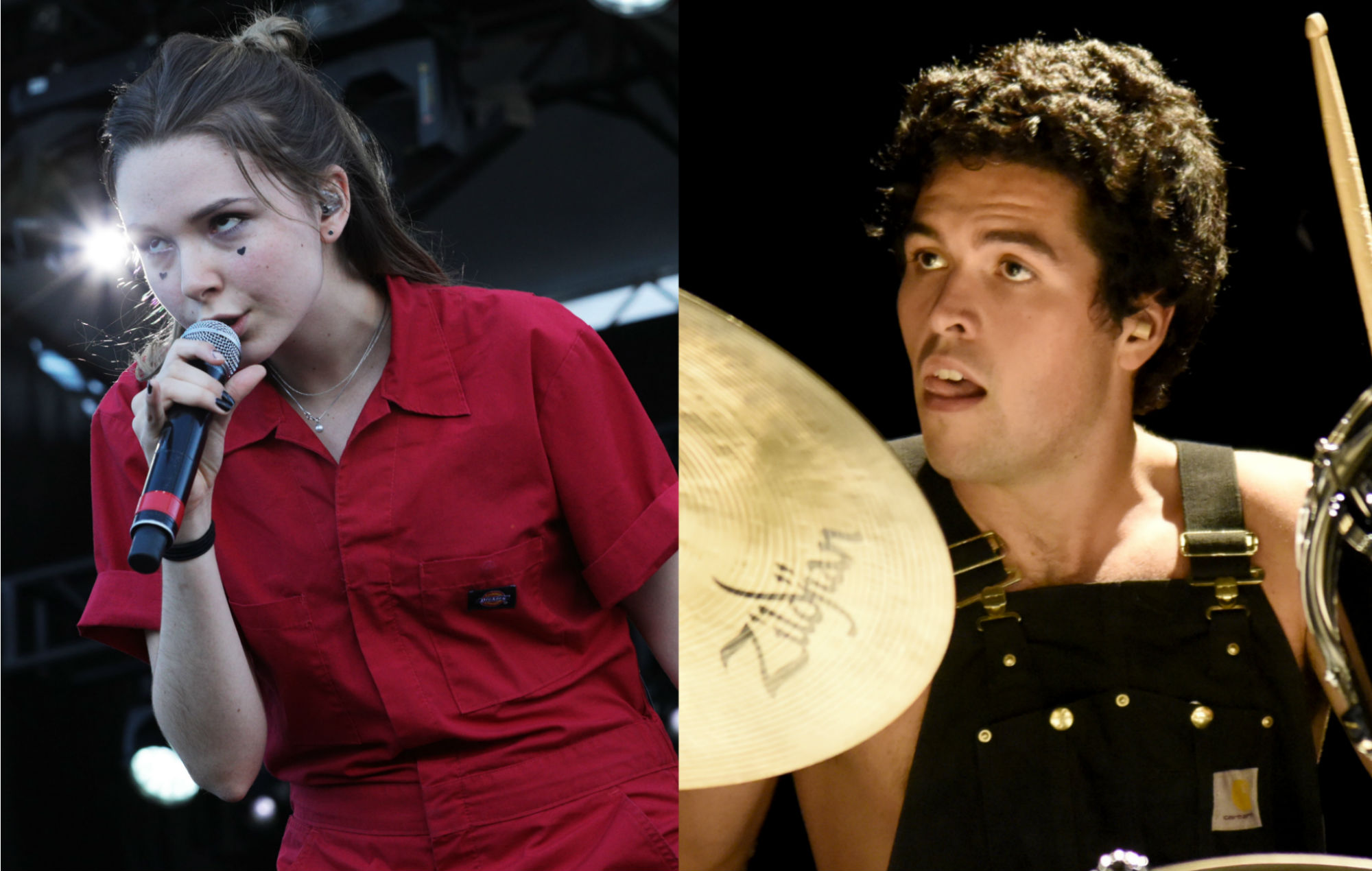 Lydia Night has shared a video responding to SWMRS‘ recent statement on the allegations of sexual misconduct made against the band’s former drummer, Joey Armstrong.

In a statement shared on Instagram back in July 2020, Night – singer of LA band The Regrettes – detailed her experiences with Armstrong (son of Green Day frontman Billie Joe Armstrong) during a one-year relationship that began in mid-2017.

Night said in the original message that the relationship began when she was 16, and ended “right before my 18th birthday”. Armstrong was 22-years-old during that period.

“Every time we took a step sexually it was because he wanted to and made it clear by either putting my hand on his crotch, shaming me for saying I wasn’t comfortable, gaslighting me or ignoring me when I didn’t my consent,” part of Night’s post read.

Earlier today, SWMRS’ Cole and Max Becker posted a video in which the former read out “an open letter to our fans”. Cole revealed that the pair were “going to keep the band going”, and confirmed that both Armstrong and Seb Mueller had departed.

On the allegations, he said: “In July 2020, my friend and the drummer of SWMRS, Joey Armstrong, was accused of emotional abuse and sexual coercion by somebody that he had dated years before. They were not the same age when they dated; he was 22, she was 17. But nonetheless, the accusations came as a shock to me.”

The frontman disputed Night’s claim that Armstrong had forced her to keep their relationship a secret. “Everyone involved in both of their lives knew about it,” he said. “I was also confused because they never had sex, and yet many people began to refer to him as a rapist. And to us as rape apologists.”

“This is the last time that I ever that I ever want to speak on this,” she began. “How dare you? Honestly, how fucking dare you sit there and not only use your brother’s near-death experience as a way to gain sympathy votes (the Beckers’ statement opened with a note on Max’s 2019 car accident), before going into victim-blaming and gaslighting me once again?”

“If you don’t want to take any accountability, that’s fine, but I’m done talking about it. I’m fucking done. Go make your fucking music, I don’t give a shit. Just please fuck off. Fuck off and stop fucking gaslighting me. Fuck you.”

In Night’s original statement from July 2020, she wrote that it has taken her “years to finally understand that I am a victim of abuse”. She also accused Armstrong of using his “position of power” as a member of a headline touring band with which to exert his control. “That professional power dynamic had made its way into all aspects of our relationship,” she said.

Night added that she spoke to Armstrong before sharing her initial statement online, and that he “seemed very empathetic” – but when she received a handwritten note from him, delivered by his bandmate, Cole Becker, Armstrong “didn’t address any of the abuse, my age, his position of power, or anything sexual at all” in the letter.

She explained that she’d taken the decision to make the claims public after SWMRS “released an unbelievably hypocritical statement on social media”, adding: “This band’s delusional positioning of themselves as woke feminists is not only triggering for me as a victim, but is complete bullshit and needs to be called out.”

The Beckers’ newly posted video statement opened with Cole offering an apology for his and Max’s lengthy silence on the matter. “It’s just been hard to find the right words to say,” he said. “The last time we were really in touch is over two years ago. The world around you and me had shut down.”

The frontman went on to talk about his bandmate and brother’s car crash and subsequent period of recovery. “It’s against that backdrop that my life changed once again,” he continued.

“Lydia was somebody who we considered a friend. When I first heard that she was going to call Joey out, I immediately called her. I remember that Joey and her had met up months before to discuss their relationship after the fact, and I believed that it had gone well. So I wanted to figure out what had changed.”

Cole continued: “We talked twice, and it was going well until she made light of my brother’s car wreck, and suggested that we could post about The Regrettes on our Instagram story to prevent her from going public with her accusations – at which point I had to step away from the situation.

“When she published her statement, I immediately saw that certain details were embellished to to make it appear worse than it was. I was there. I remember their brief relationship. I remember when he spent Mother’s Day with her family.”

Later, Cole said it “felt wrong” to get involved with the situation: “Ultimately, it isn’t my story to tell and I really didn’t wanna discredit her story. But the discrepancies were too glaring for me to take her side over his.

“I wasn’t going to condemn my friend. Because we refused to condemn him, we got cancelled. We started getting death threats. Private information about our lives was being passed around casually by people who felt betrayed by us. People were finding every creative way to tell us that we sucked and they hated us.”

Cole continued: “If you were one of these people, I get it. You had believed that we stood for something, and yet here we were seemingly contradicting ourselves by standing by our friend amid these allegations. People that I had considered friends began posting statements condemning our band.

“I recalled in horror how I had participated in this frenzy several times before from the other side. I thought that I had been using our platform for a good thing. But in the end, I was participating in a culture that rewards cruel behaviour in the name of justice. And I only learned this because of how cruel people were being to us. We were being media flogged.”

As for the future of the band, Cole said: “SWMRS is not breaking up, but a chapter of our lives has emphatically closed. Joey and Seb have both stepped away from the band to grow their personal lives. Max and I are going to keep the band going.

“After everything we’ve been through, it feels stupid to quit. He has worked relentlessly on his recovery since the accident with this sole intention of being able to play rock music on a stage again. Our band means a lot to us, and I think it means a lot to a lot of you as well.”

Cole then explained that he’d been “scared to say anything” as he was aware that his thoughts on the situation were “controversial”.

“It doesn’t fit neatly into the cultural binary of good versus bad. And I was scared because I don’t want to fight anyone – that’s the last thing I want to do. But as this continues to interfere with our ability to do our job, I have no other choice. The time has come for us to set the record straight.”

Anticipating SWMRS fans’ reaction to the statement, Cole said: “Some of you will hear this and it won’t be enough. If that’s the case, you don’t have to listen to our music. I’m only trying to tell you the truth. I’ve not always done the right thing.

“But anyone who really knows me knows that I always try to treat people with respect, and to work from a place of love. No matter how this letter finds you, we’re sending you love, respect and gratitude. It’s always been an honour to share our music with you.”

Armstrong had previously responded to the claims in his own statement, which he shared on SWMRS’ official Instagram account back in July 2020.

“While I don’t agree with some of the things she said about me, it’s important that she be allowed to say them and that she be supported for speaking out. I respect her immensely and fully accept that I failed her as a partner,” it read.

“I was selfish and I didn’t treat her the way she deserves to have been treated both during our relationship and in the two years since we broke up.”

Armstrong added: “I have apologised to her privately and I hope she can forgive me, if and when she is ready to do so. I own my mistakes and will work hard to regain the trust that I lost.”