Skip to the content
HomeK-pop(G)I-DLE live in Singapore: K-pop quintet close the curtains on a tumultuous yet triumphant era

(G)I-DLE live in Singapore: K-pop quintet close the curtains on a tumultuous yet triumphant era 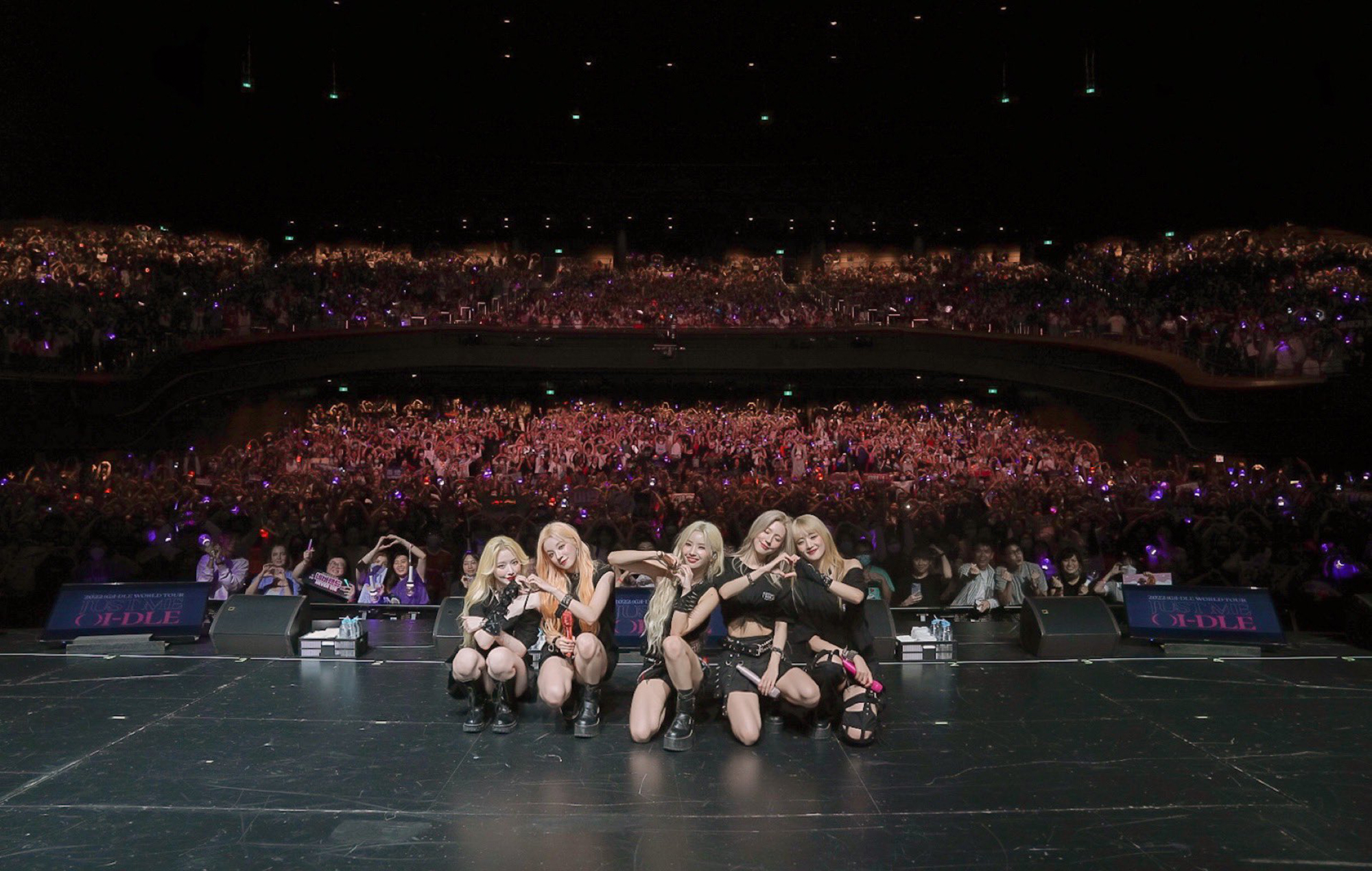 This year has been a triumphant one for (G)I-DLE. Following a year-long hiatus and a tumultuous 2021 – which saw the departure of founding member Soo-jin – the quintet emerged stronger and more confident than ever. They unveiled their aptly titled debut studio album ‘I Never Die’, nearly four years after they first burst into the scene with ‘LATATA’, and scored their biggest hit yet, both on the South Korean charts and TikTok, in comeback single ‘Tomboy’.

Riding on their newly recovered momentum, (G)I-DLE kicked off their first-ever world tour in Seoul, sweeping through the Americas, Southeast Asia and Japan before landing on the shores of Singapore for their final show on October 1 before they kickstart a new era with their mini-album ‘I Love’ later this month.

Singapore is a special place for (G)I-DLE, as Yuqi explains, as the group’s first official promotional activity – pre-debut, even – was a photoshoot in the Southeast Asian city-state. “It’s been nearly five years since then, and we’re finally standing on a stage in Singapore, holding our very own concert. Time flies, but we did it!” she exclaims in her native Mandarin.

The concert begins with the sensual slow-burn of ‘Oh My God’, vocalist Minnie’s captivating voice reverberating throughout the Star Theatre, followed by the effortlessly sleek ‘Villain Dies’. The stage is surprisingly plain – the group backdropped only by hypnotising projections on the screen – though (G)I-DLE’s performances are anything but. Without pause, they launch into the fierce choreography of their debut single ‘LATATA’, and the crowd roars to life, singing along to each word as leader and rapper Soyeon beams proudly on stage.

Minnie and Yuqi lead the charge as the quintet take turns greeting the audience, the latter deftly switching between English and Mandarin as she introduces herself as the group’s “language genius”. The members flaunt their new blonde hairstyles for their next release ‘I Love’, teasing all-new self-produced tracks on the upcoming mini-album arriving in a few weeks. “We have a lot more to show than what is expected [of us],” Miyeon teases, and just when it seems like (G)I-DLE might drop a spoiler or two, they switch things up with dance-oriented tracks ‘DUMDi DUMDi’ and ‘Luv U’.

The members disappear off-stage for an outfit change for the next segment of the concert – to what they describe as a “tragic heroine” theme – and return with a haunting performance of ‘HANN (Alone in winter)’, from their fourth mini-album ‘I Burn’. “Not a day went by without thinking about you / I miss you today, so I resent you tomorrow,” they sing, dressed in gauzy white outfits embellished with bright red roses.

From afar, it almost looks like they’re covered in blood as the girl group seamlessly transition from the vengeful piano-heavy ballad into the enchanting and poignant digital single ‘HANN (Alone)’. While (G)I-DLE have proven their versatility as a team time and again, it is on these enigmatic, intense tracks where they shine the brightest, be it through Miyeon’s thick, velvety vocal tone on ‘HWAA’ or Soyeon’s menacing rap verses in the majestic ‘Lion’. By now they’re delivering hit after hit and it becomes abundantly clear that (G)I-DLE boast one of the most solid discographies among the active K-pop acts of today.

Midway through the show, the members take a break from the setlist to entertain requests from the crowd. Minnie treats us to the passionate ‘Dahlia’, a song she wrote and composed for 2021’s ‘I Burn’. Miyeon, Yuqi and Soyeon follow with snippets of their solo singles ‘Drive’, ‘Giant’ and ‘BEAM BEAM’ respectively before passing the baton to Shuhua, who hilariously fumbles the lyrics to ‘Put It Straight’, and (G)I-DLE playfully chastise their youngest member after a fan in the crowd corrects her.

Though Soyeon has been the act’s primary songwriter since their conception, (G)I-DLE also make a conscious effort to spotlight B-sides produced by the other members throughout the concert, like Minnie’s enchanting ‘Moon’ and Yuqi’s angst-ridden ‘Liar’. The girl group never fail to thank and praise each other for their work, playfully demanding round after round of applause for their bandmates.

Despite security patrolling the aisles and swatting at every raised mobile phone in sight – visibly frustrating several concertgoers – the girls quickly recharge the atmosphere with their infectious energy. They urge the crowd to get on their feet for the show’s spirited final chapter, which bursts with edgy, audacious attitude in tracks like ‘Never Stop Me’ and ‘Uh-oh’. When the time comes for the fan-favourite ‘My Bag’, Yuqi and Soyeon coach the audience through the song’s iconic choreography while Shuhua, ever the entertainer, begins to vigorously twerk as she imitates the latter’s opening lines on the classic hip-hop track.

As the show approaches its finale, (G)I-DLE finally arrive on the track that the crowd had been waiting for. “Now, it’s time to perform the song that topped Korean charts in the first half of 2022,” Miyeon announces proudly. The cheers grow deafening when Yuqi instructs us to shout “yeah, I’m a fucking tomboy,” before launching into the rebellious, rock-leaning hit single.

After a brief interlude, the members return to the stage, making cheeky callbacks to their past hits in the quirky ‘iM THE TREND’ as a final flex, before closing the show with the uplifting ‘Escape’. “I’ll take you anywhere / I’m coming with you, you / Running without any thoughts / I’ll run with you, run with you,” Miyeon, Minnie and Yuqi sing in the chorus, whisking their fans away for one last fantastical journey and promising to meet again before saying goodbye.

The post (G)I-DLE live in Singapore: K-pop quintet close the curtains on a tumultuous yet triumphant era appeared first on NME.

Beloved K-pop stars including Luna, Kevin Woo, Min and BoHyung are all part of the Harvey Mason Jr.-