Skip to the content
HomeMusic InterviewsEnumclaw: Seattle rockers with the swagger and self-confidence of peak Britpop

Enumclaw: Seattle rockers with the swagger and self-confidence of peak Britpop 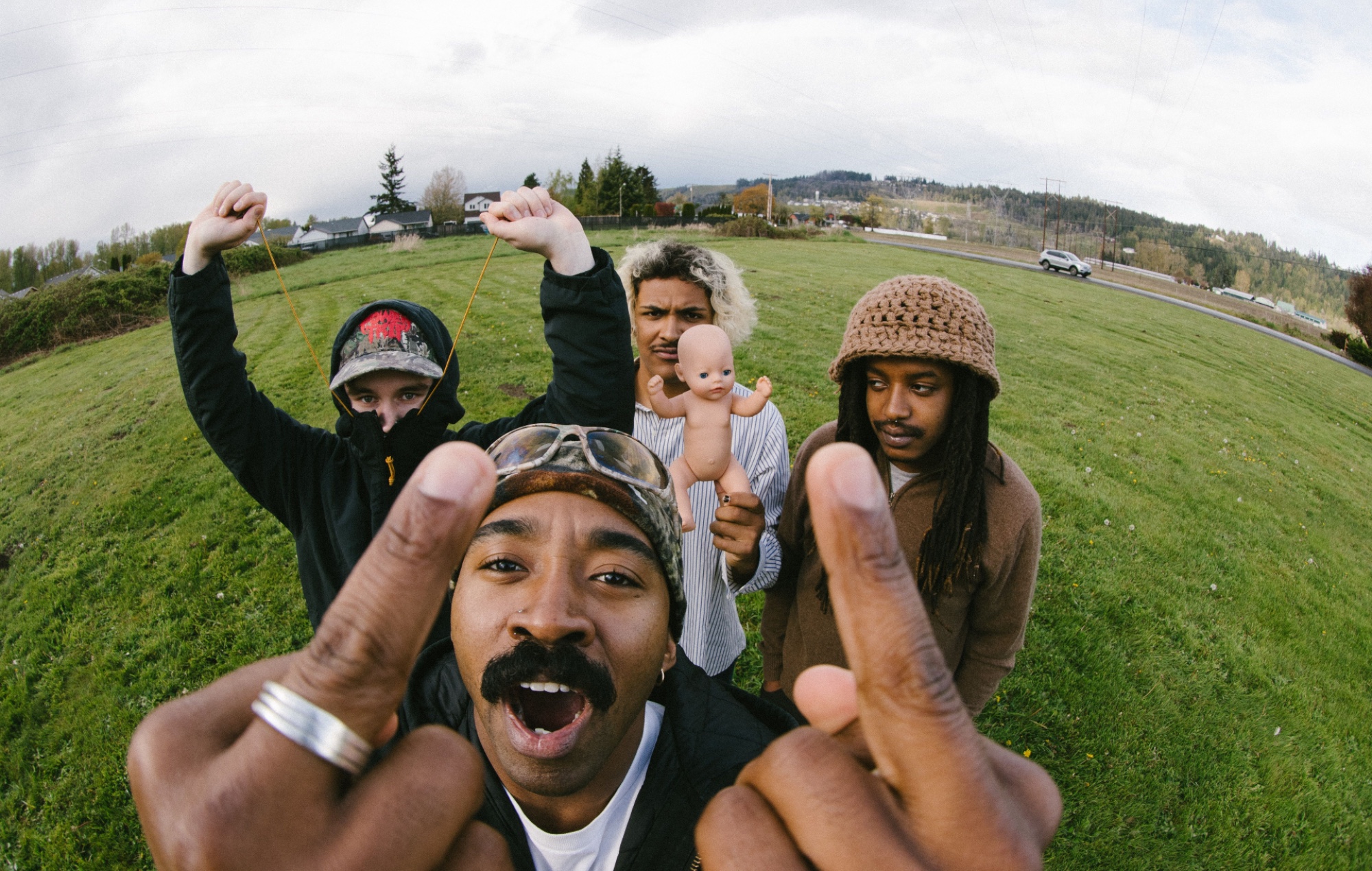 The Pacific Northwest might be infamous for its rainy climate, but a storm of a different kind has been brewing over Washington State recently. They might have only picked up their instruments just over a year ago, but with big personalities and lo-fi grunge anthems from the heart, Enumclaw are already carrying the torch for Seattle’s legendary guitar scene, which has previously spawned giants of the game like Nirvana, Mudhoney and Alice In Chains.

The gang of four pals, who met at a small-town karaoke night, are taking to the role as one of America’s most exciting bands with commanding ease. “We’re already the hottest thing smoking in Seattle,” claims their instantly loveable frontman Aramis Johnson, who has a smile as wide as his impressive moustache as he slurps through his morning cereal. Joined on a Zoom call by bandmates Nathan Cornell (guitar) and Eli Edwards (bass), they insist they’re hungry for more as they unveil their debut album, the mighty ‘Save The Baby’.

“It’s really important to me to make sure we get to where we’re going,” says Johnson. “I don’t want to get caught up with the happenings of being stuck in Tacoma or Seattle. I think in this industry, competition is key. It’s really easy to be the head of the house out here. I already feel like we’re the best thing here – there’s no competition. I want to be in a spot where I’m like, ‘Damn, the homie did this yesterday, I’ve gotta do something filthier today.”

Already defined by their competitive drive, Cornell is quick to cite ‘Household Name’, the recent album from fellow grungers Momma, as a bar they need to raise. “[The album is] really fucking good, but I want to bring more,” says Cornell. “We love them [as a band], but you have to keep pushing yourselves.” Johnson isn’t afraid to take a swipe at his peers either. He lays Enumclaw’s mission statement out bluntly: “We’re bringing songs back to the forefront, we’re not here to do any of that vibe shit.”

What sets Enumclaw apart from their contemporaries is the pop sensibilities writ large in their scuzzy sound. They’re more ready to cite Drake and Oasis as an influence than Nirvana or Mudhoney, but their music still effortlessly picks up from the ‘90s spirit of plaid shirts and cheap Pabst Blue Ribbon. Released through local label Youth Riot, their first EP, 2021’s ‘Jimbo Demo’, was crammed with punchy alt-rock ballads drenched in discordant fuzz and emotive melody. Just the emotionally direct ‘Fast N All’, on which Johnson yearned: “I’m just not for everybody / It’s hard to accept / But what’s the point of even trying if there’s no one left?”

The EP generated an instant feeling of community pride within the Seattle scene. From then on, the band quickly hit landmark local milestones including at the 650-capacity local institution Neumos, and an appearance at the Capitol Hill Block Party, an inclusive, annual three-day street festival held in the city centre. “It’s been really heartwarming,” says Johnson with his hand on heart. “We might as well be a fucking baseball team, as people are hyped to see us do what we do from a local perspective.” NME interjects: So should the Seattle Mariners watch out, then? The band crackle with laughter as Johnson responds: “Hopefully [the Mariners] let us throw out the celebratory first pitch sooner rather than later – I’m still waiting for the invite!”

On ‘Save The Baby’, the lyricism is as pressing and profound as the music, as it lifts the lid on deeply personal themes. ‘Park Lodge’ churns with heart-in-mouth emotion as Johnson picks through the challenges of his upbringing, alluding to the loss of his father at the age of 10 and growing up under the strain of state welfare. A glimmer of hope bursts through these moments, however, as the record is largely about making your own luck in life: “Where I’m from dreams aren’t made / On a sunny day / In the rain I made it happen / All inside my mind.” Without songs like this one, Johnson says he doesn’t know where he’d funnel his heavy feelings. “I can’t always write a song when I want, but I can always write when I need to,” he adds.

“For me that’s what the songs represent, as songwriting is something I need to be doing. I’m a very emotional guy; if I didn’t have this music to express myself, I don’t know what else I’d do,” he continues. “Sharing music with our homies is validating as well; one of our good friends texted me and said, ‘The only reason I got out of bed today is because of the album.’ I feel so blessed that I get to say what everybody else is thinking, and I take a lot of pride in that.”

A theme woven through the tracks is overcoming a spectrum of adversity. As a Black frontman in a predominantly white genre, Johnson is no stranger to pushing through barriers, something that has come to define his own competitive drive. “I think dealing with adversity and growing up in the rap scene has played into the music. I still want all those dumbass things: I want a chain, I want a watch, I want a grill, I want to be in the VIP section with a hundred thousand dollars in my pocket.”

He continues: “It’s important that we’re open and honest about the challenges we’ve faced, though. It’s easy to be vilified as a Black person coming into such a white space.” At SXSW one year, an employee at a record label asked why Enumclaw hadn’t signed with them; the same label’s A&Rs, however, had passed on an early version of ‘Jimbo Demo’. “My reaction [to that person] was, ‘Well yeah because your A&Rs fucking suck’. Then it became this huge thing; am I not allowed to have an opinion? It doesn’t feel like white people in my space would get the same reaction.”

Having turned to rap in lieu of any visible Black guitar heroes growing up, Johnson is already being the change he wants to see in guitar music. “It’s like anything, if there’s access, then I think Black people will start to gravitate to it and excel in it. If they started putting hockey in the hood, I bet you there would be a lot of Black people in the NHL,” he says. “I didn’t know I could be in a band until very recently, so I think as more kids start to see people like us do what we do, they’ll connect the dots and say, ‘Instead of Fruity Loops, I want a guitar for Christmas.’”

The band are hoping to soon take their message beyond the States, particularly as a UK run of dates scheduled for May this year – including an appearance at Brighton’s The Great Escape festival – was cancelled at short notice due to financial concerns. “We were all so devastated that we had to pull those dates,” says Johnson. “It all happened at the last minute, as we were all ready to hop across the pond for a month. To have the rug pulled from us was really difficult – it was honestly hard to be excited about the band for a bit. It was like, ‘Damn, not everything is always gonna be peaches and creams when it comes to this band shit.’”

Johnson says that the band are instead planning to head to the UK in spring 2023. Given their rapid rise, Enumclaw believe openness and prioritising mental health is key as the venues get bigger and the tours more far-flung. This is a vital topic for the band, given the level of tragedy that has plagued Seattle’s guitar music scene over the years – we’ve lost heroes to the struggles of fame and addiction, including Kurt Cobain, Layne Staley, and more recently, Soundgarden’s Chris Cornell, who passed away in 2017. “With us being so fresh, sometimes I feel like we’re in a really lucky position because we’re all on the same level and everything is brand new,” says Johnson.

Enumclaw are a band who not only know they can exist, but that they truly belong in this space, though Johnson is quick to admit there’s plenty to learn. “I’ve never had a hundred thousand dollars in my bank account, I’ve never been to a party and hung out with Kanye West, The Weeknd and Selena Gomez,” he says. “It’s really important that while we’re still in this early stage of being in a band, we set up a really healthy foundation so that when things do start to shift, we can brace for impact together.”

Enumclaw’s debut album ‘Save The Baby’ is out now

Radar Roundup: sign up and get our weekly new music newsletter

The post Enumclaw: Seattle rockers with the swagger and self-confidence of peak Britpop appeared first on NME.

Chen of EXO: “Love is about being honest and real with yourself”

Eve on motherhood and her career: “Most of the things I do for the future of my son”