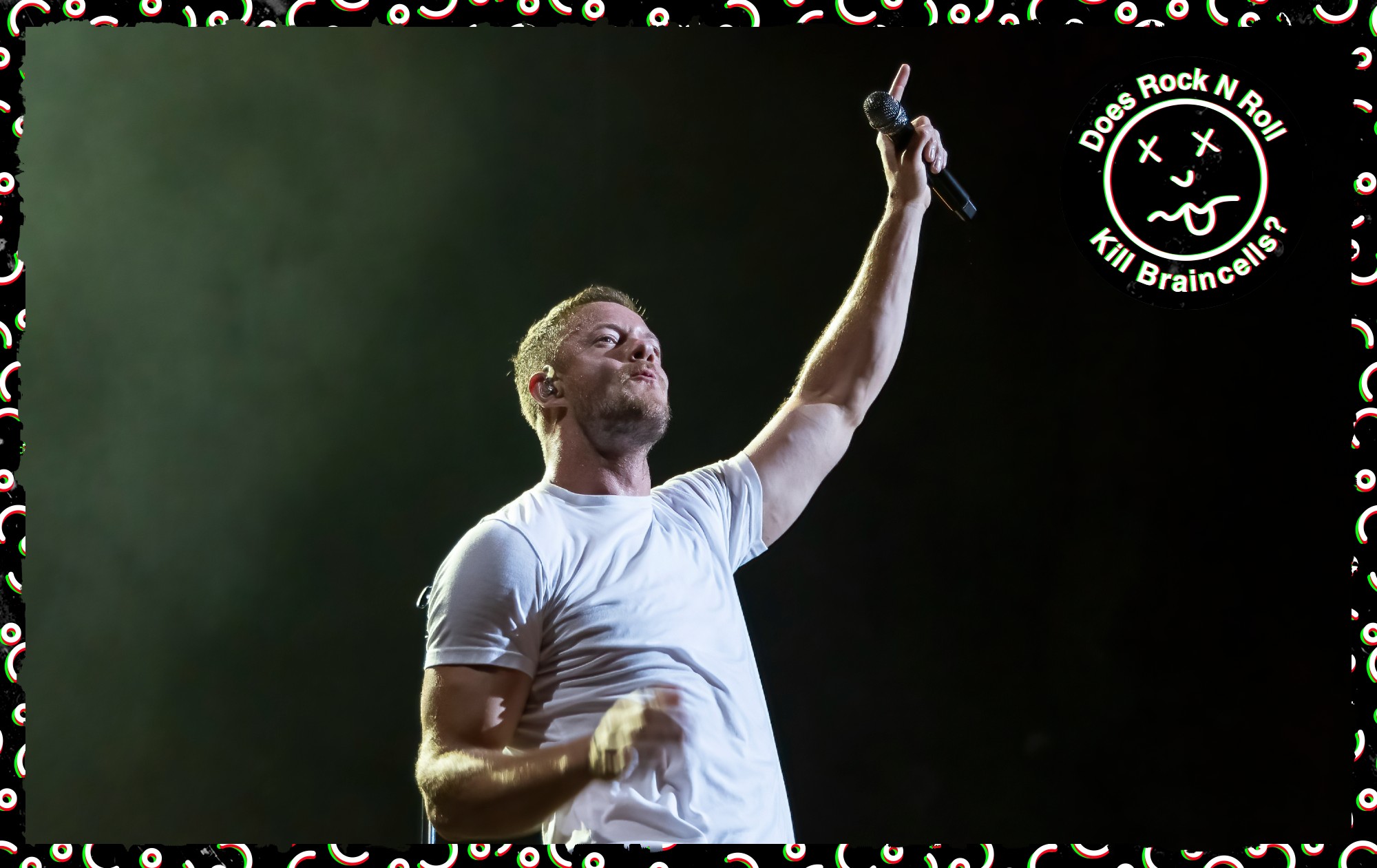 In the Imagine Dragons ‘Follow You’ video, which fellow Las Vegas band does It’s Always Sunny in Philadelphia’s Rob McElhenney mistakenly assume he’s going to watch a private concert of?

“We had the idea of a couple that goes to a Imagine Dragons show and one wants to be there and the other doesn’t. We were trying to think of who would be the meme couple to do, and reached out to It’s Always Sunny…’s Rob and Kaitlin [Olson] and they said yes, and now we’re friends. A lot of the stuff we improvised in the moment. I think it was Rob’s idea to say The Killers was his favourite band, which was perfect ‘cause we’re both from Las Vegas and came up together at the same time.

“The Killers  paved the way for us. Both Brandon Flowers and I grew up Mormon. I joined him to sing ‘Jenny Was a Friend of Mine’ once. ‘Hot Fuss’ is one of my favourite records of all time, and [The Killers’ guitarist]  Dave Keuning has performed with us onstage. A fantastic band and good people.”

Now that the cast of It’s Always Sunny…have appeared in your video, would you like to cameo in the sitcom?

“For sure! There isn’t anything on more constant rotation on our tour bus than It’s Always Sunny… It’s the one thing we agree on.”

Name any teams in the two soccer matches that Imagine Dragons have played during.

“Oh jeez, you’re really calling me out here! We played in Germany at some….soccer er, thing. I’m not a big sports guy, but I think one team wore a red shirt? [Laughs] Because I’m tall, people mistakenly assume I’m a sports guy!”

WRONG. In 2015, you donned a FC Bayern Munich shirt when Imagine Dragons performed after a match between them and FSV Mainz in Munich; and in 2019, you played the Champions League opening ceremony in Madrid before Spurs and Liverpool went head-to-head.

“I remember Bayern Munich, but I have no recollection of the other one! [Laughs] It’s been a long 10 years!”

Who hosted the episode of Saturday Night Live that Imagine Dragons performed ‘Radioactive’ with Kendrick Lamar on in 2014?

“Oh, that was Melissa McCarthy.”

“She was so funny! Kendrick’s probably my favourite modern-day artist. He’s brilliant, but also humble, sweet and kind, with no bullshit. I grew up listening to a ton of hip-hop and was more influenced by it than any other genre. I was born in 1987 and am a child of the ‘90s, so I grew up on Tupac, Biggie and Outkast, and one of the main producers I’ve worked with throughout the years is Alex Da Kid, so it’s a natural source of inspiration for me when writing music.”

Who’s the most unexpected person who’s turned out to be an Imagine Dragons fan?

“Paul McCartney and Ringo Starr was a big moment for me, because I grew up on the Beatles. Ringo gave me a big kiss on the cheek, and my child brain was blown away! At our studio in Las Vegas, one of the first things you see as you walk in is the kind note that Paul wrote [to] us saying he really enjoyed our cover of ‘Revolution’ [at the Beatles tribute at the 2014 Grammys]. That’s the first thing you see – before a Grammy or anything – which is how impactful it was to us. The most nervous I’ve ever been was covering the Beatles in front of the Beatles! That was terrifying.

“Jay-Z and Beyoncé bring a magic aura to them. Beyoncé’s incredibly stunning and I was stuttering over my words to her, and Jay-Z’s larger-than-life, and I grew up listening to everything by them. Never in my wildest dreams when I was little did I ever think they would be listening to me!”

What was The 1975’s frontman Matty Healy’s alternative name for ‘Radioactive’?

“I believe he called it ‘Pikachu Banana’? [Laughs]”

CORRECT. In 2017, Healy griped ‘’Radioactive’ by Imagine Dragons…might as well be called ‘Pikachu Banana’. It’s nothingless’, although he later praised you for using your Top Rock Artist acceptance speech at 2019’s Billboard Music Awards to warn of the dangers of LGBTQ+ conversion therapy. Ever run into Matty or anybody else who’s slagged you off afterwards?

“I’ve never met Matty, but I don’t take any of that personally. It comes with the industry. Josh Homme from the Queens of the Stone Age, there was a thing that happened in the press with us*, and he’s since come over to my house and we’ve hung out. He’s a beautiful human. It was through that I did a cover of ‘I Love You All the Time’ by Eagles of Death Metal with them. The 1975 write great music and I don’t have any hard feelings towards them or anything.

“When I was younger, I used to think: ‘Aw, that sucks, man! I love this band and now they’ve said this thing about me that hurts’, especially if it was one whose music I had grown up with. But as I’ve got older, I think: ‘Wow, this is a band I used to listen to and they know us’. A lot has happened in the last few years, and doing ayahuasca changed my outlook on everything in regards to ego and what’s meaningful.”

*When Imagine Dragons beat Queens of the Stone Age to a Grammy Award in 2014, Homme responded with an onstage rant at a gig in which he declared: ‘Fuck Imagine Dragons and fuck the Grammys.’

What is the name of the mash-up supergroup you formed for a Jimmy Kimmel Live! performance in 2015?

CORRECT. Your team-up with REO Speedwagon.

“I grew up hearing their music and my dad is a big fan. For him, it was really cool, so I was excited to do it.”

Which superhero series trailer did the Imagine Dragons song ‘Bones’ soundtrack in 2022?

“Good! That’s one of my favourite uses of our music. I remember watching it three times thinking ‘What?! This is the most graphic ultraviolent trailer ever!’, and juxtaposing it with ‘Bones’, which is an ironic dance song and tongue-in-cheek thing, was awesome.”

Complete the following of your lyrics: ‘Everyone is at each other’s throats…’?

“Those are the wrong lyrics, but I know what you think that is, and it’s from ‘Whatever It Takes’.”

WRONG. It’s from ‘Stand Up’, your 2020 protest-song with Tom Morello, featuring producer The Bloody Beetroots and activist Shea Diamond. The next lines are: ‘Everybody painting the third coat on the wall of belief/Send me relief’.

“Oh those are the lyrics! [Laughs] One point you, zero me! Tom reached out to me about that track knowing that I’ve worn my Rage Against the Machine T-shirt a lot, so he knew there was a connection. That lyric reminds me a lot of ‘Whatever It Takes’, but it makes sense the rhyme scheme is familiar to me since I wrote both of them!”

Shea is a trans activist and, and you’re vocal on calling to ban LGBTQ+ conversion therapy. In the UK, the government are banning conversion therapy for gay and lesbian – but not trans – people. Does that worry you?

“Yeah. It’s simple: conversion therapy for anybody is awful. Anybody who disputes that hasn’t done their research. It is killing kids and has killed kids. When I was in high school, I had a friend who was Mormon and gay who ended up shooting himself in front of the Mormon temple in his car, and that had a huge impact on me. To sit and watch how religion, or the pushing of a belief, and telling someone how they should be and who they should love is wrong in every form. It’s crazy to me that in 2022, there’s still conversion therapy.”

Talking of your activism, Imagine Dragons are ambassadors of UNITED24, a platform initiated by Ukraine’s President Volodymyr Zelensky to fundraise for humanitarian aid…

“Meeting Zelensky was incredible. I was blown away with his humility and he was very powerful. When he’s speaking, he feels like a leader in a way you would follow him to the death. He told us not to let people forget about Ukraine. People say: ‘What’s the use in writing a tweet about Ukraine?’ and he said it does matter because when it trends on social media, it pushes politicians to act. And also, if people can donate money to UNITED24 to buy ambulances, it would help.”

Which song by a Britpop band did Imagine Dragons cover at the 2016 Reading Festival?

CORRECT. Did they give you any feedback?

“No, the Beatles are the only people who’ve ever given us any feedback about one of our covers. For three years as a band before we got signed, when we were all living together in an apartment in Las Vegas, we made ends meet by playing covers gigs at hotels, so we learned hundreds of covers! We’d play six-hour gigs – 50 per cent original material, 50 per cent covers – which was good for us to learn our chops and become really tight as a band.”

“Man! This feels like Nardwuar or something! I can’t remember.”

“You gotta know my greatest fear is this interview because I’m notoriously known for having a bad memory! Also, these last 10 years have been such a whirlwind that my head is like scrambled eggs. I haven’t listened to that EP in so long, but we were in a studio apartment in LA, and had a newborn and were scraping by, and we sold those CDs to pay for our food.”

You’re celebrating the 10th anniversary of Imagine Dragons’ debut album ‘Night Visions’. What number did it chart at in Mexico?

WRONG. It was Number Three.

“Night Visions’ changed my life forever, blew us up, and I had no idea it would be that big. No idea that our first single ‘Radioactive’ would become a diamond song, and we’re really grateful for it.”

-The 10th anniversary edition of ‘Night Visions’ is available now. The band have also launched an interactive website celebrating the release.

Soundtrack Of My Life: Sarah Hyland

Bruce Springsteen: every album ranked in order of greatness